After all the emotion and respect of last week’s Anzac Round, the NRL has slipped back into its rightful position as the master of melodrama. Slapping, chairs thrown, diving, officials leaving fans flummoxed – the farce that is our magical game had it all. The winners go into the representative break grinners, while the losers look to the mirror and reflect. The Broncos rode roughshod over the Panthers, the Sea Eagles smashed the Bunnies and the Eels crushed the Cowboys. Super Saturday saw the Titans take the Knights apart, the Bulldogs bravely beat the odds and the Raiders and the Sharks outlast the tattered Tigers. Sunday saw the Warriors sneak past the Roosters and the Storm blitzed the Dragons.

Kenny Edwards is the pub trivia answer. Edwards became the first player sin binned for a slap, yep a slap. Gavin Cooper was hit with all the force of bantam feather. Edwards showed his anger by throwing a chair across the dressing room. He’ll probably get fined by the NRL fun police for that too. So, this is where the hard game of rugby league has come to, since David Smith’s knee jerk reaction to the infamous Paul Gallen Origin punch we’ve descended to melees, handbags at ten paces and now slapping. In one hundred years, rugby league, if it still exists or hasn’t gone underground like Fight Club, will be unrecognisable, the game renamed ‘Touchy Feely’ with players wearing bubble wrap jerseys and fans showing emotion frog marched into room 101.

The Bunker had a monumental brain malfunction on Thursday night or in layman’s terms a colossal f*@k up! Peter Wallace had the ball clearly knocked out backwards by Josh McGuire, picked up by James Tamou and planted for a try, or so it seemed. ‘No Try’ the Bunker pressed red, the Panthers turned burgundy. How can everyone see this was a clear case of play on and try bar the bunker?!? If I hear the term ‘loose carry’ put forward as an excuse for a blatant strip or ball knocked out I’m going to go postal – breathe Jock, remember your coping techniques – in with the good air, out with the bad air. Todd Greenberg this Bunker is your baby, that bub needs a nappy change and put to bed.

Thursday night we had a scrum win against the feed, league went retro! I had a tear in my eye but then came the whistle, no go the prop cannot strike at the ball, refeed. Friday night there was a scrum win against the feed after Eels prop Tim Mannah struck at the ball, play on! Peter Wallace has the ball knocked out, loose carry, next night the ball is knocked out, again it’s play on, this drives the players, coaches, fans mad. All we ask for is common sense and consistency but league’s inconsistency is its most consistent trait.

Ashley Klein take a bow. The officials receive brickbats way more than bouquets but I’m handing Klein a bunch of roses, from the neighbours’ front yard, for having the courage to penalise Mitchell Pearce in the 79th minute knowing it would cost the Roosters the game. It was a big call but the correct call. Stephen Kearney has apparently followed my lead, chipping in and buying Klein a voucher from New Zealand’s No1 barber shop franchise Bro’s n Fro’s.

Rabbits are a prey animal, the Sea Eagles caught them napping, swooped, and dug in their talons tearing them to shreds. Martin Taupau and Brenton Lawrence set a marvellous platform for Blake Green and Daly Cherry-Evans to set the backs in motion. Dylan Walker and Akuila Uate were simply stunning, slicing the Bunnies backs to bits. Trent Barrett has Manly playing stylish footy moving the ball beautifully and they head into the next phase of the NRL season in ominous form. Home form is the only part of their makeup that needs touching up, sort that and they’ll become an attractive finals prospect.

Getting early ball and seeing more of it, James Roberts is smoking hot at the moment and burning opponents like wild fire with his electrifying speed. Underutilised last season as the Broncos persisted with monotonous left side shots, Wayne Bennett has expanded the Broncos play to attack more and use both sides of the field unleashing Roberts. When Jimmy the Jet ignites the afterburners his opposition counterparts are clutching nothing but dust. NSW selectors must be keeping a close eye on Roberts and surely he survives when Laurie Daley’s 52-man Origin pack has the deck cut in half, though a leg injury picked up on Thursday could place his chances in jeopardy. 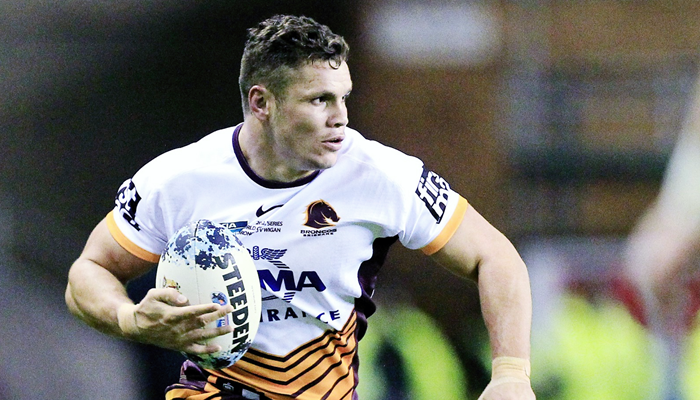 Down on confidence the Panthers needed a good start against the Broncos. After the poor early decision went against them their reaction was ordinary, heads dropped and by the time they raised it was game over. There is still time to turn things around and the week away from the NRL might be just the tonic. Going into camp didn’t work leading into the Broncos game and it might be best for the Panthers to have a week away and forget about footy or just go old school, get on the turps, grab your nearest and dearest team mate, give him a totally platonic man hug and hold a good old honesty session. Get out into the open whatever is bugging them and get on with things. PS Don’t invite the coach as the honesty session usually includes bagging him.

Jarryd Hayne auditioned for an Origin role in the centres and the Hayne Plane all but landed himself a blue jersey with two tries in a triple AAA rated performance. The Titans were slow to start and it was Hayne who injected himself into the game and took it away from the Knights. Hayne is still not fully fit but looks better every week, he can smell Origin is around the corner and as his senses heighten so does his taste for the big arena. Hayne is all class when on song and in good news for the Titans and the Blues he looked hungry and ripped in. The Titans want to be on board the Hayne Plane for 2018, the nagging doubt with his contract deadline coming is which destination Hayne’s luggage is getting unloaded.

The Bulldogs victory over the Raiders was one of their best in recent times. No James Graham, no Josh Reynolds, down at half time, Dogs fans must have been feeling as green as the Raiders jerseys. Adversity is a part of the fabric at the Bulldogs, it’s in their DNA. They stepped up as one, the Morris brothers, Adam Elliott and Will Hopoate were exceptional, Aiden Tolman inspirational and they bravely held off the Raiders who would have travelled back down the Hume Highway quietly, the Dogs victory song still ringing in their heads. The victorious performance was so typical of the Bulldogs, never write them off. Bookmakers who had the Dogs missing the Top 8 this season readjust your line.

The Storm entered the Dragons den with swagger and struck with such speed and force the Dragons were reeling and never recovered. The top of the table clash was all over inside the first twenty minutes as the Storm back three put on a masterclass. Suliasi Vunivalu and Josh Addo-Carr on the wings were fast, clinical and finishing sublime with one Vunivalu dive to score showing the skill of an acrobat and speed of a ninja, it was amazing. While Billy Slater wound the clock back and chimed in with a double as well, he was outstanding. Queensland Origin selectors would have been smiling, they’ll fit Billy the Kid and Darius Boyd in there somewhere. The Storm were intent on showing St George who is number one and have forged a four-point gap over the field. The Dragons obviously missed Gareth Widdop but the power the Storm produced would have blown any side off the park.

We head into the representative round with the NRL as hard to tip as it is easy to love and we love our league as it is so unpredictable. Any team can win on any given day. It’s easier to predict the target of Donald Trump’s next tweet than tip the round. The only sure things in life are death, taxes and the Broncos playing on a Thursday or Friday night. Don’t get too upset with League Central, the referees or the Bunker, do as I do when the mercury rises, take a breath, and imagine them as the Three Amigos. Picture Tony Archer in a sombrero, hands on hip, thrusting his groin forwards heartily, it’ll take you to a happy place. Though when you do see a team wronged, my other option is to go out the backyard and have a chat with the Singing Bush. If the bush talks back you might want to get some help or ask for a job inside the Bunker.