The Anzac Round always brings emotions to the surface, it is an amazing mix of tradition, respect, honour and remembrance that gets players and fans alike swept up in the ceremony and theatre. Drama and rugby league go hand in hand and this week was no exception. Controversy reigned supreme on Friday night as both games featured enough show stopping moments it could play on Broadway, ‘The Book of Moron’ starring the Bunker is up for a Tony Award! With Anzac Day not until Tuesday, Jock’s Wrap is going all Donald Trump and prematurely striking!

It was thriller central and in a round where we salute our troops past and present, I’m dipping my lid to all the players for giving it everything and providing brilliant entertainment. We had tears, tantrums and terrific tries. We started with a golden point blockbuster as the Sea Eagles escaped Canberra with a win, breaking Raiders hearts and the Broncos took down the Bunnies in a game that had everything except a bar room brawl. The Eels edged the Panthers then the Knights looked into the future as Kalyn Ponga starred for the Cowboys, while the Titans shocked the Sharks in a boil over in the Shire. Sunday saw the Cleary bus exit ANZ Stadium partying like it was 2005 after the Tigers tippy toed past the Bulldogs in a great game of footy!

Michael Maguire was fuming and ‘The Burrow’ frothing, dentures and beanies flying everywhere. A brilliant fight back put the Bunnies in pole position but two crucial decisions went the Broncos way and with it two vital points. Both involved Anthony Milford, firstly held up over the line for what seemed an eternity before the ball squirted out to Tautau Moga, try deemed the bunker. Wrong said Maguire and in a jaw dropper the following day, so did refs boss Tony Archer! Then the match winning field goal was snapped brilliantly on his left foot by the Milford but replays showed Milf had knocked on in scooping the ball up. Game over but cue raging discussion!

How can Anthony Milford get a head knock, line up and take the shot for goal then go off the field for a Head Injury Assessment? That will be the question League Central should be firing at the Broncos. If the NRL are fair dinkum about concussion protocols than this incident will come under extreme scrutiny. Delayed concussion will be thrown about as a reason but does it pass the pub test? Your shout Wayne.

The golden point thriller in Canberra was a tale of two goal posts as Jarrod Croker hit and missed from the sideline in regulation before Dylan Walker’s winner hit and went over! In a spiteful match, it was often handbags at ten paces, there were more melees than roundabouts in Canberra. The crowd was seething at two ball stripping penalties in golden point awarded to Manly. Was it poor Raiders discipline or an amazing coincidence the Sea Eagles grip on the Steeden suddenly loosened at the crucial moments? In the end the Raiders can only blame themselves bombing a try in golden point as Croker slipped with Nic Cotric unmarked as they didn’t bother taking the easier option field goal on offer. The Raiders motto is ‘Live by the sword, die by the sword’ this time they fell on it.

Jordan Rapana is a freak in the nicest sense of the word. The try he scored that put the Raiders in front with just minutes to go was sensational and try of the season! Only a player like Rapana in the form he’s in could have scored it. Blake Austin’s grubber looked way too strong, one of Rapana’s greatest virtues is he never gives up on a play. He unveiled his cape, flew from the clouds, lunged and grabbed the ball in mid-air with it about to land dead in goal and somehow planted the ball inside the line. A ripper from Rapana, adding to his ever-increasing sensational show reel. 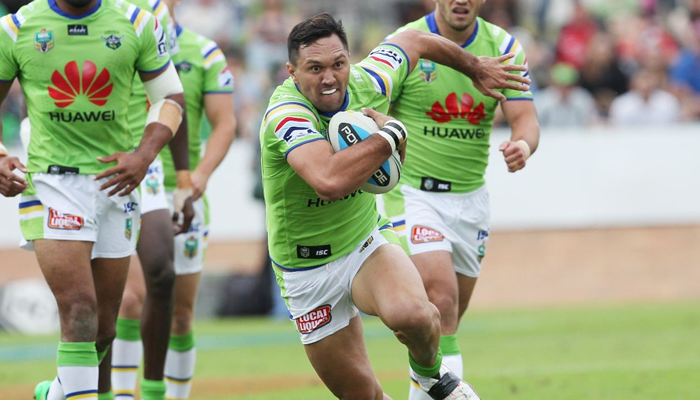 The Rabbitohs and the Raiders went to bed Friday night with rightful rage and woke up on Saturday with regret. Both had wonderful chances to take field goals in the final moments, Rabbitohs to tie, Raiders to win and neither took them. They both went for broke, all or nothing plays seeking a try and came up empty. Why are NRL sides so ordinary at kicking field goals? Do they not practice setting up for them and taking them? Yes, the defence is always a couple of metres offside and markers take off before the ball is even played but the ratio of successful field goals to attempts is worse than a 40-year-old virgin’s strike rate picking up at a night club.

Panthers Chances Going Up In Smoke

What is going on at the foot of the mountains? I keep waiting for them to click and produce the exciting footy we know they can but the lame performance displayed on Saturday cried out trouble. Their confidence looks shot. An Anzac Round derby against Parramatta should have the side amped to the max, hitting eleven! The Panthers were about as aggressive as the front row of a Pink Floyd concert enveloped in a doobie induced fog. Fire up Penrith or the season will slip away! Gus Gould needs to employ Mark Geyer as the official water boy and have MG on field just giving it to them, failing that slip a jersey on him and let him cut loose!

The Titans courage and spirit was finally rewarded with a tough come from behind win. They took down the Sharks with a late double from the super impressive super sub Leivaha Pulu. The Titans character was tested in spades but after a grinding battle they buried the Sharks. With returning troops, Neil Henry’s men are nearly at full strength or as close to it as their luck will allow and they have the talent to move rapidly up the ladder. Two wins now and still a couple of wins outside the top eight, you cannot write this side off as long as they keep faith in themselves.

Jarryd Hayne was brilliant in his first game back from injury displaying his rare talent, beautifully timed quick hands sending team mates away, immaculate attacking kicks, solid defence, freakishly grabbing opposition kicks, he showcased it all. Anyone who said Hayne wasn’t on board with Titans culture didn’t watch this match. He gave everything and gave the Titans even more. The Hayne Plane is so jam-packed, full of believers, even United Airlines couldn’t drag anyone off! Origin is around the corner and Hayne looks good in blue, just sayin…

It was apt that the players who stood tallest on the field in the victory over the Bulldogs were the ones who created all the headlines off it. Aaron Woods had a stormer, proving you can share an espresso midweek with your opponents and future team mates and still perform! Judging by the emotional output of James Tedesco and Mitchell Moses when Kevin Naiqama scored the match winner, they’re Tigers until the jersey is taken off for the final time. While the returning Luke Brooks had his best game for quite some time, the Cleary butterfly has flapped its wings and is taking effect.

It has been an amazing Anzac Round thus far and we still have the two biggest games to come! Who picked the Titans toppling the Sharks? Well of course I didn’t, remember my motto – 50% of the time I’m right every time.