Welcome to Round 7 of Rosco’s Team of the Week. Each week I’ll be giving you the low down of who’s who of each round.

In a losing side, James Tedesco put on a display that will have him fighting it out with Manly’s Tom Trbojevic to see who will wear the number 1 jersey for NSW. In a week where it was announced that Teddy had deleted his Twitter account, he managed to run for a game high 248 metres, breaking 12 tackles along the way. Whilst possessing speed in spades, it is his work rate and frequency of popping up around the ball that make him one of the game’s more dangerous full-backs. Unfortunately for the Tigers, Parramatta had different ideas about the result and Ivan Cleary’s team were not able to cement the result. Once all the team’s off-field distractions are done with, the Tigers will trouble some of the teams at the top of the ladder.

This week I have to raise my glass to “The Don”, Anthony Don from the Gold Coast Titans. Don is a winger that flies under the radar, but is extremely consistent with the performances that he delivers. Don managed to get over the line to help keep his side afloat in a very tight all QLD derby, as well as probably delivering the play of the week. Following through on a grubber, Don, without managing to get a hand to the ball, was able to chip it back inside for a waiting team-mate who went on to score. The kick that Maradona would have been proud of was all done on the fly and in one motion. Definitely one for the highlights reel.  A notable mention has to go out to Jordan Rapana who is not only mesmerizing opposition teams, but fans alike with his week in, week out efforts in season 2017.

James Roberts takes the crown for the centre of the week. This is a strongly contested position at the moment with the Raiders Joey Leilua seemingly having a mortgage on the title. Roberts has been spoken about a lot in the last week with Jack Bird now confirmed to be heading to the Broncos, also tipped to possibly play the same centre position as Roberts. With contract talks looming for Roberts he needed to have a solid game, and against his former team he produced three tries and run for over 180 meters. To date, this would have to be one of his best performances in Broncos’ colours.

This week it was a toss of the coin. Mitchell Pearce has more than likely played his way back into an Origin jersey for the Blues, Milford has given the Broncos hope that he has found his attacking spark and Mitch Moses has all and sundry at the Tigers hoping he will stick around until the end of the season with another slashing display. The man who got the nod this week is Gareth Widdop. The Englishman has really been finding form over the last few weeks, and that is on the back of great go forward by the Dragons pack. Widdop kicked four goals and got one over the stripe himself, as well as having a hand in a couple other tries. With the Dragons attack simplified this year and Widdop seemingly calling the shots, the Red V have raced to the top of the ladder and do not look like faltering. Widdop has also again attracted interest from his former club Melbourne looking to replace Cooper Cronk. Current form considered, he would be a walk up start. 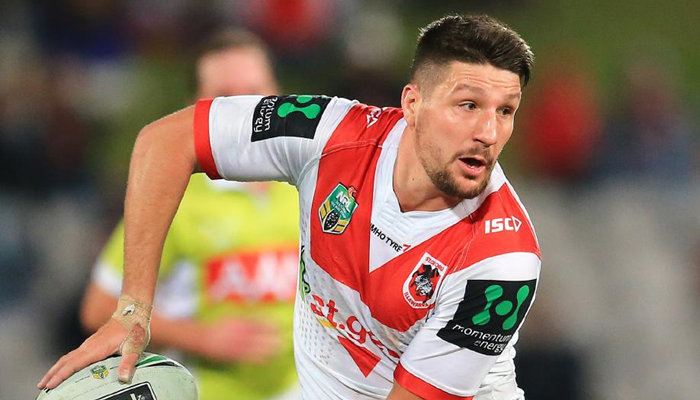 With an almost all-Queensland affair for this week’s team, Gold Coast Titan and former Broncos star Jarrod Wallace is in at prop. Jarrod has signaled his desire to play State of Origin this year and did his chances no harm with a valiant display against a crop of current rep players from both the Queensland and Kiwi sides. Wallace amassed an enormous 264 metres with 26 runs. His defensive display was just as good, recording 33 tackles at Suncorp Stadium, and would no doubt have Origin coach Kevvie Walters scribbling his name down in his little book.

Jayden Brailey has managed to hold on to the Sharks number 9 jersey for now and making every post a winner. With the introduction of James Segeyaro into the Sharks pack, they have some great spark in attack and he manages to give the forwards positive direction. The untimely injury means that Brailey continues to be able to show his wares to coach Shane Flanagan. The Sharks junior managed to run for 60 metres, including a line break. Brailey showed some clever work around the ruck to deliver a perfect pass for Captain Paul Gallen to be able to crash over the line. Many pundits are tipping the youngster to take out the NRL’s Rookie of the Year award and with another display of great service from the ruck, it is not hard to see why. Segeyaro will need to push hard to take the 9 away from the 21-year-old.

The wrecking ball from the Cowboys takes the chocolates for the back rowers this week. Jason Taumalolo really needs to step up to keep the Cowboys season on track after only scoring four points for the first stanza against the table topping Dragons, picking up the two points was always going to be a big ask. Although the side has no Johnathan Thurston or Matt Scott at the moment, when you think North Queensland you also think Taumalolo. Although the score board against the Dragons doesn’t reflect it, he managed 18 hit ups for 168 metres with a few tackle busts thrown in for good measure. Coen Hess, Taumalolo’s stable mate, has been grabbing all the headlines of late but for the Cowboys to dominate and get back to be a top four threat, they need their ten-million-dollar man to be firing. Look for the big man to really lift his game in the coming weeks.

Selections are purely my own based on a range of stats. I would love your feedback and contributions so please comment below. Have a great week footy heads!