Rapid fire between rounds, it seems like only yesterday we were honouring our troops with two magnificent games of league on Anzac Day to signal the end of round eight… hang on, it was only yesterday! Re-load and re-energise NRL fans, we’re back into action.

The Panthers are in a rut and have gone into camp for this match. They look unhappy campers and are hoping the team will bond on tour, whether sitting around a camp fire, eating beans and hearing Gus Gould tell ghost stories works we’ll find out. Bryce Cartwright has been named at five-eighth and better for having a run last week. The Broncos were lucky against the Rabbitohs but I can guarantee Wayne Bennett isn’t handing the two points back. Brisbane at home should have too much fire power but the Panthers must show a hungrier attitude and tougher intent whatever the result. Anthony Griffin v his old mentor Bennett is a nice sideline to the main event, think I can safely say the footy will be more entertaining than their conversation.

Dudded last start expect the Bunnies to come bursting out of their burrow. If they can bottle that second half performance they’ll be extremely hard to beat. Manly were super impressive in beating the Raiders, their away form is startling, the Sea Eagles thrive on the intimidating atmosphere. Highly anticipated is the clash between Martin ‘Kapow’ Taupau and ‘Slammin’ Sam Burgess, the meeting of the monster trucks will require panel beating afterwards. Talking trash, Dylan Walker is always at the epicentre of it and will look to ignite his own engine and rev up the Bunnies emotions. Who will have enough petrol left in the tank to get to the chequered flag first?

The Cowboys roped in the Knights eventually but the visit of the Eels takes things up a notch. Without Jonathan Thurston, the Cowboys have lacked direction as Michael Morgan looks a bit lost minus his JT monogrammed security blanket. Well JT has been named in jersey 18 so don’t be surprised to see him take the field, in fact if I was a gambler I’d wager he will. Kalyn Ponga is growing as a threat for tiring defences and the Eels need to keep the young pup on a tight leash. Parramatta scraped past Penrith and while winning, are still not quite clicking. If Corey Norman gets enough chances he’ll crack the Cowboys. Both defences are willing and in a tight one, this could come down to a good old fashioned shoot out but Thurston’s return places extra bullets in the Cowboys chamber.

You can focus on all the injuries on the Glitter Strip or do as the Titans do and just focus on the job at hand. The glass is always half full in Titan territory and while some see this as the battle of the cellar dwellers, the Titans will view it as an opportunity to move towards the penthouse. Jarryd Hayne is a unique gem and while ever he produces diamonds he won’t rock the boat. His position swapping with the impressive Tyrone Roberts worked wonderfully last week, expect more of the same. Kane Elgey named on the bench adds to the attacking mix and match. The Knights hope of a positive season is receding like a gambler’s chips on the tables at Jupiters Casino. Nathan Brown may as well place a bet on number 16 on the roulette wheel because if they don’t stop losing bravely and make winning a habit that’s the position on the table they’ll end up. 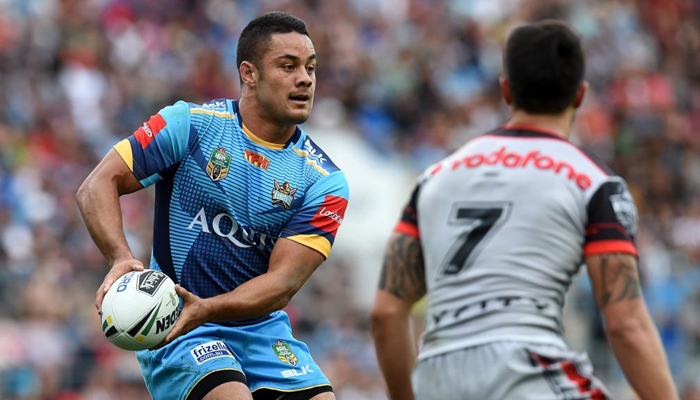 Both last start, last gasp losers, this is shaping up as an absolute cracker and potentially the match of the round. Des Hasler has once again named Matt Frawley in jersey 20 but unless he contracts scurvy in the next 48 hours, he’ll play. Des thinks he’s pulling the wool over our eyes, maybe he is a magician at heart, impress me Dessie try sawing Sam Kasiano in half! The Raiders will be seething over last week’s golden point loss and will be desperate to atone. After missing out on Kangaroo jerseys, expect huge games from both Jarrod Croker and Joey Leilua to persuade Laurie Daley they’d look good in Origin blue but the platform must be set, the forward clashes are crucial. In massive news, the Tigers have poked the Bulldogs back in the eye signing Josh Reynolds for mega bucks! What reception will the Bulldogs kennel give the Grub? Boo him at your own peril. Josh doesn’t need firing up!! This will be a tight one. Golden point again Raiders?

The Wests Tigers board sent an email out asking members not to boo the potentially, nay probably, departing Aaron Woods, this week they’re sending out an edict asking for clapping only between the 12th and 14th minutes. Woods response to the boo boys was a man of the match performance, so Tigers fans choose your own adventure. I despise booing, so try cheering loudly and see how Woodsy reacts. The Sharks were outgunned and out-enthused by the Titans so will have been given a rocket at training by Shane Flanagan. Expect fireworks. The Tigers better man up or they’ll be man handled. Paul Gallen and company are cranky, I hope the Tigers are double bagging it downstairs!

Our brilliant Anzac Day combatants all hit the field on Sunday. The Roosters will still be sore after the pounding they gave and received from the Dragons, so I would expect the Warriors game plan to be start fast and hit hard. If the Chooks can dig in and get into the grind they have plenty of points in them. After two tough quality opponents in the Raiders and Storm, the Warriors know where they stand, they’re just off the pace of the upper echelon. They have fallen away in the last 20 minutes of both games and this is where Kieran Foran comes in. He is the man who can steer and stir the side into upping the ante when the gas is running on empty. The halves of both sides play old school both sides of the field, their flair combined with fluency could force the issue.

A top of the table clash that without the injured Dragon Gareth Widdop has gone from mouth-watering to leaving the Saints parched. I’d be surprised if Mary McGregor doesn’t go with Kurt Mann at 6. Mann did his apprenticeship under Craig Bellamy in the Storm factory and would love to shop front his wares to both his old coach and current boss. The Dragons will defend with all their trademark tenacity, their ability to enter the red zone and cross the white stripe could be the black mark against them. The Storm’s big 3 – Cam Smith, Cooper Cronk and Billy Slater – rose to the Anzac challenge of the Warriors and their undeniable class should be enough to overcome the Dragons. The one nagging doubt is how Cameron Munster has gelled in the five-eighth role. Ryley Jacks performed his role superbly and Munster’s jack-in-the-box style can cause a bottleneck in the Melbourne machine. St George will give their all but I don’t think they can spring a surprise.

Enjoy the footy and gamble responsibly, and if the rugby league on offer is anything like the fabulous fare dished up in the Anzac Round we’ll all come out winners.

Rugby league is tribal it is raw emotion stripped bare. I love the Panthers camping idea, let’s get back to nature! League and life has gone too urban and PC, let’s all go bush, light a fire, dance around it like our ancestors used to, strip our inner selves bare and get naked… oh the Panthers are ‘camping’ in a five-star hotel, each room equipped with a jacuzzi and in house movies, that’s not camping that’s glamping.

That’ll do me, I’m off to pack the tent in the car while the Panthers all bond over their X-Box games in their climate-controlled den.