It’s Easter and that means family, footy, after going to Church of course, and eating so many Easter eggs you prepare to dial emergency while the Lindt bunny dings the little bell around its neck calling out to you “eat me”. We have a massive round of our religion also known as the NRL coming up, who is going to get the chocolates?

These traditional Easter rivals kick off the Good Friday feast. The Bulldogs are aiming for three wins straight. Despite Matt Frawley ticking every box a rookie half can, being Easter, Des Hasler has shown faith in Josh Reynolds and Moses Mbye, and that faith must be repaid or one of them will pay a price. The Rabbitohs chances revolve around Cody Walker and watch the Doggies rush at him to shut him down, luckily for Walker, David Klemmer is missing. Lucky for Klemmer too with the slapping Sin Bin introduced this week! The Battle of Britain will be compelling ringside viewing. James Graham and Sam Burgess seek each other out like guided missiles and collide with a force that could topple Stonehenge over like dominoes! In a tight game, will the Easter Bunny favour its brethren?

Sitting on the bottom rung of the ladder, the Knights need a win desperately and the form the Roosters are in, the Knights can take them down. Dane Gagai is in sensational form and if the Chooks continue their ordinary defence Gagai will carve them up like they’re Sunday roast. The Roosters were appalling last week and Latrell Mitchell has paid the penalty for his disinterest being dropped. Whatever is going on with Mitchell, hopefully he rectifies things because he’s too talented for the reserves. Trent Robinson has scratched a line in the chook pen and put the rest of the side on notice. Red alert for Nathan Brown’s young side, expect a Roosters backlash.

The Titans travel up the M1 to take on their neighbours the Broncos. They meet a Brisbane side featuring Kodi Nikorima at half who gets his chance for an extended stint with Ben Hunt out for a reported 8 weeks! Anthony Milford had his best game of the season easily last week and Wayne Bennett will expect MILF to take control of the team. The Titans are finally getting some troops back and not a moment too soon as they have been cannon fodder. Nathan Peats returns adding much needed starch to the ruck area where the Broncos will send countless raids. The Titans frontline will only hold so long, I fear a Broncos blitz.

Manly are a proud club but they were manhandled by the Dragons last week and have lost enforcers Martin Taupau and Nate Myles which will hinder their chances of holding back a hurting Storm who had their purple pride pricked as they suffered Shark bite in the surf n turf that was a sodden AAMI Park. The Storm have named Cameron Munster and Jesse Bromwich on an extended bench, but even if they don’t play, the Storm will be tough to beat, they rarely lose two on the trot. These two sides always produce great theatre but don’t expect another Battle of Brookie, as the Sea Eagles scratchy form will most likely see this play out as the Last Stand at Lottoland, anyone willing to play the part of General Custer? 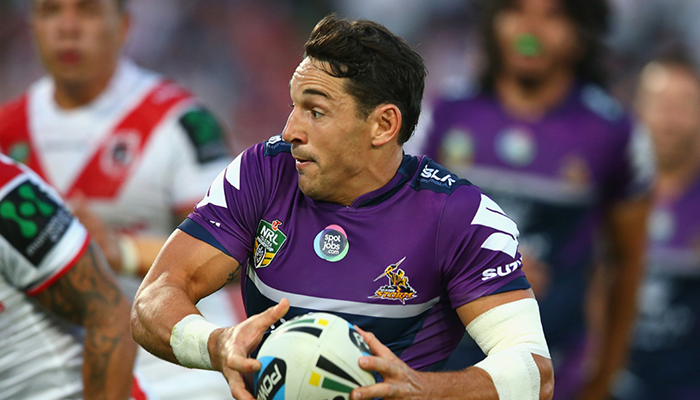 The Raiders are racing up the table and racking up the points, led by Jordan Rapana who is scoring tries like bakeries churning out hot cross buns. The Warriors have transformed under Kieran Foran’s stewardship, his presence calming all around and given their previously haphazard play direction, they no longer run around the paddock like Brown’s cows. The Raiders are the entertainers of the NRL and expect plenty of points scored in this one. The Warriors are no strangers to the goal line themselves, unfortunately for them, expect to see them standing behind their own in a dejected huddle with hands on hips for a lot of this match.

On top of the table, the Dragons are firing as one complete unit, each element of their game running smoothly. Gareth Widdop is the cherry on top, adding the brilliance and finesse to the hard work done in the furnace. Fortune favours the Dragons as they meet the Cowboys in crisis. Jonathan Thurston is out and without him the Cowboys lose their swagger. It’s up to Michael Morgan to take the reins but their best chance is through their champion prized bulls Coen Hess and Jason Taumalolo who would surely share the blue ribbon at the Royal Easter show. The Dragons steel defence will be tested with Hess and Taumalolo charging, the sight of the Big Red V making their nostrils flare. But no JT, no go! Sorry Dragons fans, Jock the Mock is finally biting the bullet – I’m backing the Saints! I may have just ended the Dragons winning ways.

The bad boys are back from detention, and the returns of Tyrone Peachey and potentially Bryce Cartwright from injury, hand the Panthers a full deck and they need to hold all the aces as they meet a Sharks side high on confidence after knocking off the Storm. The sideline to sideline, hot potato footy of Penrith contrasts the direct granite like intensity of Cronulla and these Sharks hit hard and often, leaving many teams needing an ice bath, hot mug of cocoa and a good lie down afterwards. The Panthers must display the desperation needed to shock the Sharks, they need to start winning. Matt Moylan and Bryce Cartwright, if he plays, are the jokers in the pack that can produce the winning hand.

What an Easter Monday showdown to finish the round. The Ivan Cleary bus is back from North QLD with a topped-up tank full of hope and expectation of a promised land over the horizon. Mitchell Moses is still clinging to the rear door of the bus, and hasn’t yanked the chain to disembark yet but will want to show off his bag of tricks to his soon to be new club, the Eels. The Corey Norman show bag has not been a good seller lately and he needs to rediscover his magic and pull an Easter bunny out of his hat for the Eels to arrest their losing streak. A major concern is whether the Tigers can get up again after playing their grand final against the Cowboys, ending a tumultuous week. The bus may have a flat tyre.

It is refreshing to get to the footy after all the contract blabbering, whether it be Mitchell Moses parting with the Tigers, Aaron Woods player swap with James Graham, where Kieran Foran is playing next year. I’ll leave that to the player agents and club chief executives. I’m just going to sit back, enjoy the footy and the odd chocolate egg.