The NRL is coming into the home stretch. Nine teams cannot fit into eight no matter how hard you try shove that square into the circle, some team will be unlucky and miss out. Teams 10-13 have got out the calculators and tried to convince themselves they’re still a chance. I’m not sure what algorithm is being used but for them to make the finals it must have been designed by Stephen Hawking needing the fortune of Steven Bradbury. Here’s some free advice for them: Flight Centre have some cracking deals on trips to Phuket in September at the moment, have a gander.

The Panthers need to continue winning as they wait for the teams above to slip up so they can pounce. With the Dragons playing the Knights aka “two points in the bag” the Panthers must keep in touch. In bad news for the Panthers Matt Moylan is out with his gammy hammy, the good news is it allows Nathan Cleary to take the reins and control the side. Penrith have looked so much better when Nathan has clear air. Peter Wallace at hooker will assist with the kicking duties to take some pressure off Cleary. Bryce Cartwright is a fair chance of returning, so he may end up partnering Cleary in the halves. In the doghouse Des Hasler will discover whether he has lost the dressing room and potentially his job. The Bulldogs were bullied by the Broncos, so you’d expect the proud Doggies to apply the bounce back factor but if the care factor is below zero then Des is paddling up you know what creek without a paddle. At home at Pepper Stadium, the Panthers should win and rub salt into the Doggies wounds.

This match is all about heart. If the Warriors honestly think they’re a finals hope they will come out with all guns blazing, which you must do to combat the power of the Sharks. Cronulla’s forwards are tough and uncompromising, words not usually associated with the Warriors pack. The Kiwis couldn’t handle the Cowboys big boppers, the worn out Warriors go from Jason Taumalolo to Andrew Fifita, the human boulder to the wrecking ball. It’s like escaping a bad tempered bear in the forest then bumping into a bison! The Sharks have lost James Maloney for 2-3 weeks which has caused a reshuffle with Fa’amanu Brown shifting from hooker to halves. The Warriors will see this as the Sharks weakness and through Kieran Foran and Roger Tuivasa-Sheck, try to exploit it. The Shire Sherriff Paul Gallen re-signed to go around again next year and I think he’ll lead from the front and hand the Warriors a defeat, consigning them to their now signature exit before the finals.

This match will have a finals feel and intensity about it. The Broncos are seeking Top 4 security, the Eels their first playoffs appearance since 2009. You know the Broncos will bring their A game, every Bennett side does, a measure of the esteem the great man is held in by his players. The Eels have to meet the energy and enthusiasm of the Broncos especially their big backrow, Nathan Brown’s clash with Josh McGuire will be a belter! The Eels halves hold the key to unlocking the Broncos suffocating defence, usually led by Adam Blair racing out of the line like Usain Bolt out of the blocks putting pressure on the first receiver. Blair better be wary of his timing and contact on the playmakers as the referees will be on send-off red alert after the Sia Soliola stuff up. If Corey Norman and Mitchell Moses keep their composure they have the talent to tame the Broncos. There is extra pressure on the Eels magic men as Clint Gutherson’s season ending ACL injury snuffs out the spark he adds. Gutherson has been the go to man all season conjuring something out of nothing all year. One fullback departs, another returns as Darius Boyd is back. His comeback reunites the Broncos brilliant spine and I think their class will be the difference in a close one.

Hasn’t life turned rosy all of a sudden for the Big Red V! They ended their slump by thumping a Manly side which had an off day and now get an opposed training session with bonus two points handed to them from the ever-generous and always brave Knights. Or is it a given? The Knights will fire up for the Dragons in front of their faithful footy loving fans. Knocking off the Dragons and putting a dent in their finals aspirations would be a great feather in their cap plus they’d get to sing that winning song in the sheds they’ve all forgotten the words to. The Knights as usual were valiant but ultimately outclassed by the Roosters last week. The Dragons won’t be any easier, they were awesome in mauling Manly with the forwards led by Jack De Belin and Tyson Frizzell too hot to handle. If the Saints dominate the forwards battle, Gareth Widdop will put the Knights to the sword. Widdop return to form was timely as the Dragons cannot afford to slip up and they won’t here. Rookie Matt Dufty’s dynamic debut has been rewarded by keeping the custodian spot with the returning Josh Dugan selected in the centres. Duges won’t be happy about that as he sees himself as a world class fullback, it’s tattooed across his shoulder blades I think, it’s hard to tell there’s more ink there than a squadron of scared squids. 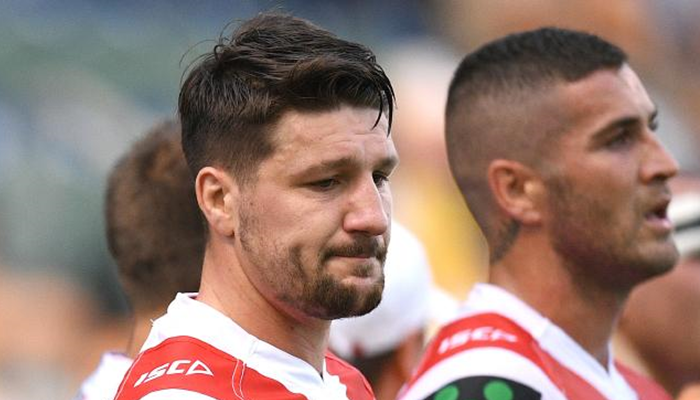 The newly crowned bad boys of the NRL hit the big smoke minus Jordan Rapana, Josh Papalii and of course Sia Soliola all rubbed out by the judiciary over the past two weeks. Soliola suspended until round 26 after his shocking shot on Billy Slater. Ricky Stuart has arrived in Sin City armed with his cheque book and a highly charged team filled with frustration and faith. The Raiders believe they can win six in a row and make the finals. It’s hard to fathom the confidence having won just seven games all season but if any team can get on a roll it is the Green Machine. Aidan Sezer has found form but he’ll need his big men to belt the Bunnies. Souths season is shot so they are purely playing for pride but I like the look of their side. Michael Maguire has shifted John Sutton back into the second row, which brings Cody Walker into the halves, and the speed merchant Alex Johnston to fullback where he plies his trade best. Sam Burgess is selected but carrying a rib injury so Angus Crichton will attempt to fill his sizeable boots while brother’s Tom and George attempt to catch the ball. The Raiders have it all to play for, it’s now or never or Ricky forever hold your peace and keep your trap shut in the post-match press conference… cheque please.

This is a tough match to call. The Roosters are missing some big guns but easily accounted for the Knights last week but it’s a big step up in class from Newcastle to North Queensland. It’s like comparing the power of President Putin to the clout clutched by the raffle seller at your local club. Shout out at the Rooty Hill RSL you win a meat tray, roar in Russia you end up sent to Siberia! The Roosters halves Luke Keary and Mitchell Pearce were clinical in knocking off the Knights and will need to continue their superb form to quell the Cowboys. Victor Radley retains the hooking spot after a fantastic debut. Radley is from the Clovelly Crocodiles and a promising talent. Roosters local juniors are about as rare as hen’s teeth and ancient reptiles in the eastern suburbs, the Coogee Bay Hotel the exception of course. The Cowboys are a really confident side, sticking to Paul Green’s game plan expertly. The Cowboys know the style they want to play and are executing it perfectly. Michael Morgan and Te Maire Martin are excelling off the back of the excellent yardage gained from the big men. It’s a massive game in respect of the Top 4 ambitions of both sides, the Roosters are running second on the ladder but I think the Cowboys can pluck them.

The old rivalry is missing a vital ingredient this week as Billy Slater hasn’t been selected, no surprise after his severe concussion. Ryley Jacks replaces Billy the Kid with the young champion Cameron Munster shifting to the back. Munster was brilliant against the Raiders and the Storm will need him to continue his golden form. Cameron Smith has been picked but I doubt he’ll play. You don’t take risks with someone as valuable as Smith this close to the finals. A week or two out won’t hurt him or the Storm. In the superstar’s absence, Cooper Cronk will run the show and look to senior men Jesse Bromwich and Dale Finucane to assist his leadership. After having their pride pricked by the embarrassing loss to the Dragons last week, the Sea Eagles will rise for this. They don’t need motivation to take on the Storm but will have copped both barrels from Trent Barrett this week in a spray that would make even Craig Bellamy blush. Manly may have cost themselves a Top 4 spot, their pathetic performance putting it in peril. They welcome back Blake Green, Brenton Lawrence and Api Koroisau and not a moment too soon. Manly’s gain combined with the Storm’s loss tips the scales. The Sea Eagles will be out to make a statement, Barrett’s boys will deliver.

The Titans won’t give up on finals footy until it’s mathematically improbable. Neil Henry doesn’t have to hide the abacus his men will give it their all. The Titans pushed the Panthers last start, an intercept try and a couple of calls not going their way sealing their fate. The Tigers have improved immensely under Ivan Cleary. The players are on the bus and on the up. Defensively they are sound and obviously worked hard on this. There are some enticing match ups: Ash Taylor v Luke Brooks the battle of the young halfbacks; Blues Origin fullback James Tedesco v Jarryd Hayne, the man who had a strangle hold on that spot before the NFL beckoned; Ryan James v Aaron Woods, the incumbent Blues prop forward whose spot James would like to take next year. Konrad Hurrell is out which hurts the Titans as the Hurrellcane has been in rampaging form and a weapon out wide. The Titans have shown great courage in the face of adversity and Hurrell’s absence won’t even register. They are a resilient bunch and at home will keep the flimsy finals fantasy alive.

Enjoy the footy and remember gamble responsibly. If I was going to have a flutter I reckon throw a lazy lobster on someone getting marched, after the fallout from the Slater slam the referees have been raked over the coals by the boss Tony Archer. Any player silly enough to cross the line will be sent back across the chalk faster than Archer fires off statements correcting his gun shy whistle blowers.

Put this on a post-it note Tony: your officials are scared to make the big calls because you’ve neutered them.

Give yourself 10 in the bin!