I’m entering week two of my previews and predictions with all the confidence of a man with no arms and no legs Turkish Oil Wrestling Vladimir Putin in a Moscow side street. The NRL is such a tough tight competition, any side can win on any given day. The season began with some sides continuing where they left off from 2016, some sides playing a bit disjointed as they had new recruits, some playing hamstrung by injuries, and some sides playing like they had forgotten the competition was starting – yes I’m looking at you here Penrith!

Positive signs in Latte land, a brilliant first half by the Roosters last week featured flowing football at its finest, followed by a forgetful second stanza that won’t be forgotten by Trent Robinson. The Bulldogs will be thankful they are playing the Chooks and not the Storm again. Des Hasler is trying to change the attack but it will take time, time Hasler and the Doggies may not have. Josh Reynolds and Moses Mbye touched the ball more than last year but the results were the same, stuttering attack, unable to break the opposition down. The Storm’s steel was too hard for the Dogs to crack, and while the Chooks are easier to pluck, the Roosters have too many points in them.

These two sides are chalk and cheese. The Storm are the ultimate professionals and their round 1 defensive masterclass was a supreme example of the culture within this club. The loss of forward leader Jesse Bromwich won’t hurt them too much as Craig Bellamy just slots another drone off the production line into his system. The Warriors lack of professionalism nearly cost them victory last week. They are consistently inconsistent. Stephen Kearney will be pleased they escaped against the Knights, they would have lost that match last year. Roger Tuivasa-Sheck led well and will only get better as a leader and player. The match ups across the park are top notch: Johnson v Cronk, RTS v Munster, Smith v Luke! The rookie number 6s, the flyers on the flanks, this game will be a humdinger! The Warriors like playing the Storm, it brings out their best. Their best won’t be enough.

Surely these two teams cannot deliver another classic, can they?!? Both first up winners, the Cowboys were the more impressive in miraculously inching past the Raiders in a high intensity thriller. Rumours swirl surrounding Wayne Bennett and an unhappy dressing room. No signs of that on the field, off it Bennett shows nothing, unsurprising, Wayne hasn’t shown emotion publicly since stumbling upon a shiny shilling on the ground while doing his paper run on his penny farthing. Jason Taumalolo and Matt Scott were metre eating monsters last week and it falls to the Broncos forwards to stop them. They stepped up against the Sharks when the heat was applied led by Sam Thaiday, they’ll need to step even higher. Another big test for Ben Hunt and Anthony Milford up against the best in the business Jonathan Thurston. Darius Boyd is in career best form, always selecting the correct pass. The Broncos must be near perfect to get the lollies in this one. Suncorp Stadium will rock, prepare for another classic!

Knights fans rejoice, your team is competitive! They showed plenty taking the Warriors to the wire last week. Composure at the pointy end is lacking but that can only come through experience playing at this level in these moments. Nathan Brown is giving youth a chance and the young bucks are repaying him in effort and spirit. It will pay off one day. Nathan Ross continues to impress and if the Knights can give him chances he’ll take them. As for the Titans, all the news out of their camp concerns as usual Jarryd Hayne – “Hold the back page!”, wait for it, Jarryd fined by team mates for being a lazy trainer. News to some, clickbait to me. Hayne is a one-man melodrama. If his next dream is to become an actor, I’m sure Days of Our Lives can write a character in for him. The big man loves the big stage and don’t be surprised if he plays a blinder as a return serve to the media. The Titans were underdone last time out but they will be ready to go this week. 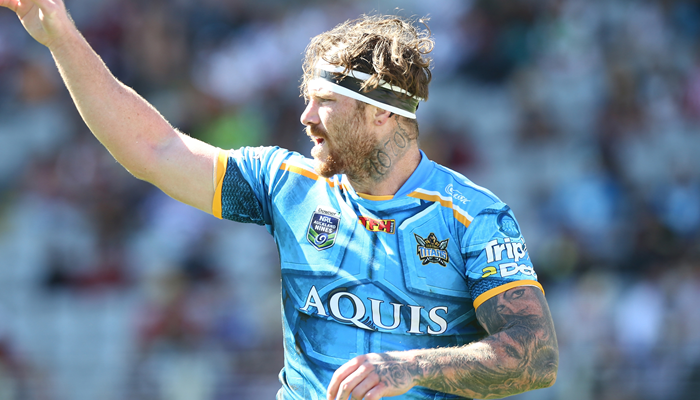 The Sea Eagles welcome the Rabbitohs to the fear inducing furnace that is Lottoland! This week’s feature promotion, if Akuila Uate kicks a field goal between the 11th and 13th minute every fan at the ground over the age of 96 gets a free auto pick in that night’s Powerball draw. Both sides will reset the season clocks and forget last week happened. Manly turned over so much ball it was impossible to tell if their new side had gelled. The Sea Eagles goal line defence was committed only letting in three tries under extreme pressure, good signs for embattled coach Trent Barrett. Injuries cruelled Souths chances against the Tigers. The Bunnies will want to show they are better than that, expect a statement of intent.  Sam Burgess will be leading the way and have a huge impact on this match. A loss from either side and they’re only a week or two away from ‘must win’ territory. The stakes for the two points are rising. Whispers are growing that Adam Reynolds will make a shock return, which makes this game even harder to pick. Put a blindfold on and throw a dart at a board. We’re at Lottoland, roll the dice on this one.

First the Cowboys, now the reigning premiers, the finals have started early for the Raiders. Awesome and courageous in defeat in Townsville, the Raiders return home confident they have the squad to go deep into September. Big defence, big attack, big players, big dreams, everything about Canberra is big, except Ricky Stuart’s anger threshold. Sticky goes off the handle at the drop of a Viking hat or Steeden ball.  Compared to Stuart, Shane Flanagan is as calm as a swami. He needed to be after the Sharks error riddled opening to their title defence, Cronulla cannot afford to start that way again. The kicking game of James Maloney is a major key to pin down the Raiders back three whose yardage numbers are generally insane. The forward clashes will be fierce. Paul Gallen will enjoy reacquainting himself with Josh Papalii, as will the raucous crowd. Not sure what the Raiders officials have programmed as pregame entertainment but Michael Ennis leading the crowd in the Viking Clap would bring the house down and raise home fans temperatures. Disappointing last week the Sharks will be much better but will it be enough? The Sharks did win both games down in the nation’s capital last year. Hard to believe one of these sides will 0 and 2 after this week. Down, down Cronulla.

The Panthers were dreadful in meekly submitting to a fired up Dragons. Anthony Griffin is known as ‘Hook’ and if the Panthers dish that muck up again he will apply his moniker. Penrith will not be that poor again all season. They were soft and that won’t sit well at the foot of the mountains. Pride is paramount in a footballer’s armoury and the Panthers have had theirs severely dented. The Tigers were sensational in dismantling the wounded Rabbitohs. The Tigers halves were superb last week and the battle of the young tyros on both sides will be enthralling. Any holes in the Panthers line and the Tigers speedsters will slice through. Trouble is that was last week, this is the NRL, the season shaping up as unpredictable as always. Let’s predict using last week’s form as a guide: Tigers win by 60! Now let’s apply NRL logic:

Wow! Just wow! That was what I would have said while watching the Dragons demolition last week if I could have spoken. Instead I was gobsmacked, a blank expression frozen on my face for 80 minutes. That look that could land me a role on The Bold and The Beautiful (you can do it too Haynesy! Don’t give up your dreams!) The Dragons forwards shredded through the Panthers like a cheese grater but the Eels are made of sterner stuff. They’ve been through the shredder and came out the other side. Rebuilt on and off the field, the Eels are league’s version of the Six Million Dollar Man, better than they were before. Better, stronger, faster. The St George forwards will charge with their usual venom but the Eels won’t budge. Corey Norman is in masterful form, he is the wizard who can win this game on his own. The Eels have too much class and too many points in them.

The final word for the week is a big thumb’s up to the Wests Tigers who in a sporting world of cynicism and win at all costs attitudes, admitted they took it easy on Greg Inglis last Friday night. Knowing his knee was badly injured they made sure when they tackled him they didn’t attack him around the legs. Not many other sides would do this and it was heartening to read of players taking care of their fellow professional. Wests Tigers I dip my lid!

That was a bit like the heart-warming animal story at the end of the news after 29 minutes of car crashes, court stories and bombings in Mosul. Maybe it should be 29 minutes the other way around, I know had a warm fuzzy feeling inside after reading the Tigers article.

Enjoy the footy and remember gamble responsibly, which basically means don’t put any of your hard earned on my tips – I don’t!!