Although he had an amazing World Cup 9’s tournament for Samoa, Newcastle Knights hooker Danny Levi could be set for a move over to the Super League.

Levi was the Knights’ first string hooker during their run of form in mid 2019, however the club would go on to sign Cronulla Sharks number nine Jayden Brailey.

Although Levi is contracted to the Knights in 2020, he is believed to be looking for a club where he can be guaranteed a starting role. 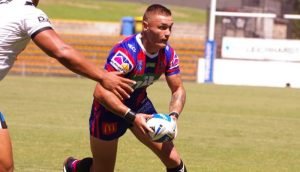 The Manly-Warringah Sea Eagles could be an option depending on the outcome of the Manase Fainu situation, however many are reporting that the Super League is a more likely option, as the hooker could find himself a starting role and find a club sooner rather than later.

Whilst no club in particular has been linked with Levi, there will be multiple lining up for his signature in the near future.