Former Salford and Featherstone prop Darcy Lussick has stoked the fires of his rivalry with Nelson Asofa-Solomona on social media.

Lussick posted on his Instagram story: “If anyone knows where Nelson hiding last 3 years after he called me out tell him I’m waiting.”

The 32-year-old rugby player turned boxer also called out anyone else who wants to ‘get it’.

Lussick – brother of former Salford hooker Joey – knocked out Justin Hodges in his maiden fight back in 2019, but hasn’t stepped back in the ring since.

That was only part of the rant on Instagram with Lussick previously writing: “You boys in my messages acting tough saying you’ll bash me what the f**k can you offer? I’m not fighting at the local leagues club like you boys.

“I’m bouncing mid way through the first round again with a big bag of cash live on main event.

“If anyone knows where big Nelson hiding last 3 years after he called me out tell him I’m waiting.

“Now my messages full of ‘come fight a real boxer’. Firstly I’m not a real boxer so I’d get bashed and secondly get back to your 9-5 before I report you to your boss mother f***er.

“Next bloke that talks shit I’m take your chin and your girl.”

Asofa-Solomona had called Lussick out back in April 2020, but the recent pandemic has meant things turned quiet, however, Lussick has now reopened old wounds, with the Melbourne Storm prop yet to respond. 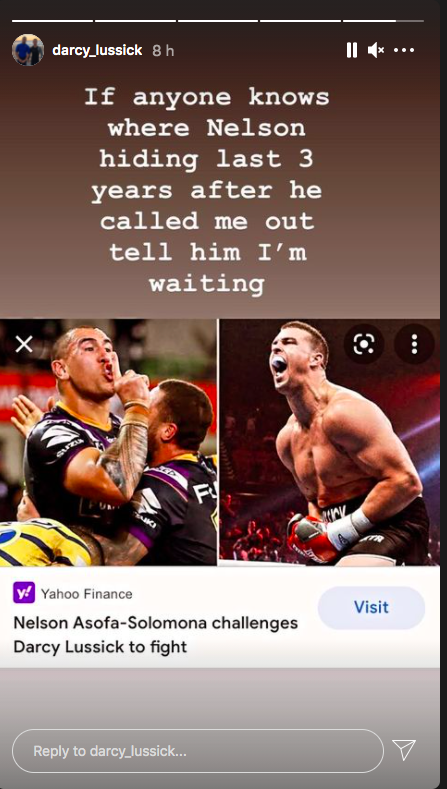