Luke Gale has received a two-match ban for contact with the referee.

Having accessed the disciplinary match review process, the incident happened in the 25th minute of Leeds’ narrow 27-26 loss to Warrington on Sunday, with Gale charged with a Grade B “deliberate or reckless physical contact with a match official.”

Gale could still contest the charge, but appeals in recent times have often been dismissed as “frivolous” – Castleford’s Liam Watts, for example, challenged his one-match ban a few months ago, but that was upgraded to two games.

It does mean, however, that the halfback will miss the contest against former side Castleford this upcoming Friday.

He is also not the first Leeds man to have received such a charge, with both Alex Mellor and Tom Briscoe being on the end of the disciplinary match review for similar offences in 2021. 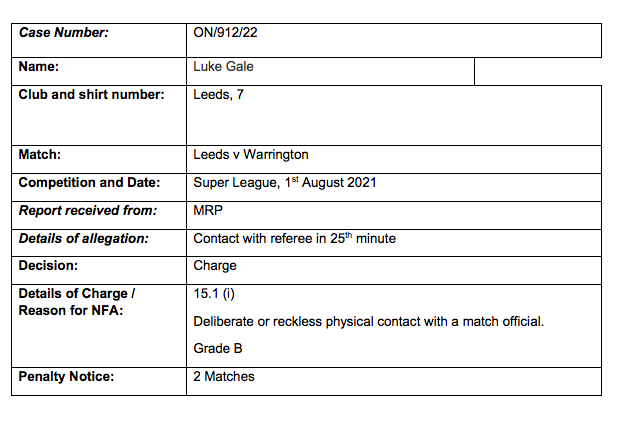 Cant recall seeing this in the game. Seems harsh or or the RFL giving him an extra punishment for the comments he made about that unbelievably bad decision by HIcks – who by the way should get stood down for the way he adjudicated on that match. .