Leeds Rhinos have been dealt a significant blow ahead of the Super League run-in, with outside backs Tom Briscoe and Konrad Hurrell both picking up injuries in Friday’s win over Huddersfield.

Winger Briscoe suffered ACL (anterior cruciate ligament) damage and is likely to miss the rest of the season.

The severity of the injury is not yet known, but the former England international could be set to spend up to nine months on the sidelines.

“He has got to wait for the swelling to go down and do a bit of rehab’ around it,” said Rhinos interim coach Richard Agar. “He will see a specialist in a couple of weeks and sort out an operation.

“It is a real blow for us, we are all upset for Tommy.

“I have coached him before, at Hull, and have a good relationship with him, but while I’ve been here I think his commitment and the quality of his performances have been second to none – and his determination to help turn things around.

“He is a fairly quiet bloke by nature and, at times, can maybe fly under the radar a bit, but he has shown terrific leadership in and around the squad during this period.

“It is a major blow for us and for Tom and we really feel for him.”

Briscoe’s injury could pave the way for his younger brother, Luke, to have an extended run in the Leeds side.

The 25-year-old has spent the majority of the past two seasons on dual-registration with Featherstone but has been called into the Leeds squad on numerous occasions as injury backup.

And it seems that could be the case again this week, with the Rhinos pulling him out of the Rovers’ squad that beat Dewsbury last weekend.

“With Tommy going down we pulled Luke [out] as a precaution,” continued Agar. “We have got the option to play Luke there, or move Liam Sutcliffe to the centre and Harry Newman to the wing.

“We will decide later, we don’t know our team yet.

“We didn’t want Luke to play on Sunday and miss a couple of days’ training while he’s recovering or put himself at risk of injury.

“We just thought it was the sensible option to withdraw him from Featherstone’s game and keep him fresh for this week.”

Marquee centre Hurrell also picked up a knock after scoring twice at the John Smith’s stadium. 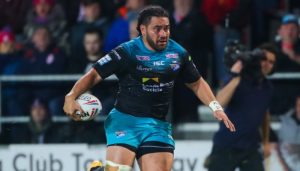 The 28-year-old rolled his ankle and left the ground in a protective boot.

As Agar added, however, his injury isn’t thought to be as serious as Briscoe’s:  “Koni was unable to train [today] but we are confident he will be in with a shout for Friday.

“The ankle’s a bit swollen, but there’s no major damage in there. We just need that to settle down a bit.”