Kevin Naiqama’s partner has expressed her joy at not having to ‘dodge’ questions anymore about the former St Helens star’s future following his new move to the NRL.

The 32-year-old returns to Australia after a successful three-year stint at Super League club St Helens, where he played an integral part in the club’s three consecutive championships, including his two-try performance in the 2021 Super League Grand Final which saw him claim the Harry Sunderland Trophy as man of the match.

A veteran of the NRL with 113 matches to his name for the Newcastle Knights, Penrith Panthers and Wests Tigers, Naiqama adds plenty of versatility and experience to the Sydney Roosters backline, able to play in the centres, on the wing and at fullback, having done so at club and international level.

Leading on and off the field, Naiqama has represented Fiji in 19 test matches and 10 World Cup matches, captaining the side since 2016, including the 2017 Rugby League World Cup.

Naiqama had initially considered retirement following the end of the 2021 Super League season, but the pull of returning to the NRL with the Roosters proved too much.

The Fijian centre was also linked with a reunion at the Wests Tigers, but the 32-year-old chose Sydney instead.

And, his partner couldn’t be happier, complimenting him on his new colours too: “Finnnaaalllly the news is out, no need to dodge the questions. Proud of you babe. New colours look good on you.” 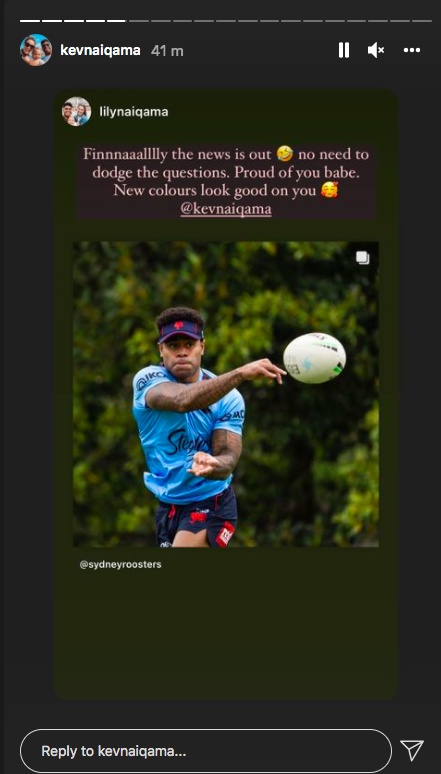