Josh Charnley has revealed that he was involved in a hilarious stitch-up by former club Wigan Warriors on his wedding day.

The current Warrington Wolves winger tied the knot with his partner last weekend, but former teammate Sam Powell was in his Wigan kit, doing a promotional video at Charnley’s wedding.

Charnley took it all in good spirits, announcing: “When your favourite Wigan Warriors player comes and does a promo at our wedding, thanks Wigan,” alongside a thumbs up and laughing face emoji. 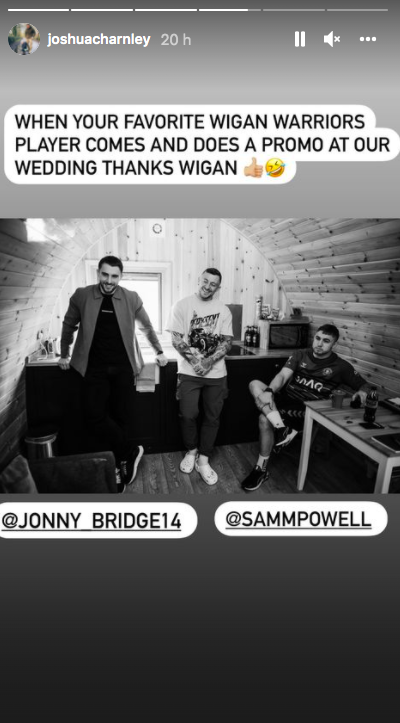 Charnley has been at Warrington since 2018, scoring 50 tries in 87 games following a spell in rugby union with the Sale Sharks.

He had previously scored 162 tries in 171 appearances for hometown club Wigan before moving into the 15-a-side code in 2016.

Powell has made six new signings as new boss of Warrington with Greg Minikin, Peter Mata’utia, Billy Magoulias, Oliver Holmes, James Harrison and Joe Bullock coming through the doors at the Halliwell Jones Stadium, with the likes of Jake Mamo and Tom Lineham exiting.

Steve Price’s reign as Wire boss ended in a disappointing fashion in 2021 with a first-round exit in the Super League play-offs, whilst Powell failed to guide his Castleford side to a play-off spot for the second year in a row.