John Bateman has taken a swipe at his his haters after captaining the England national side to a 30-10 victory over France.

The Wigan forward hasn’t had the best of seasons by his own admission at Wigan, but stepped up to captain England in the south of France.

A Super League champion with the Warriors back in 2018, Bateman swapped Lancashire for Canberra ahead of the 2019 season, helping the Green machine to the NRL Grand Final in that year as well as the Dally M second-rower of the year.

It was a superb performance from Bateman in the weekend’s win over France and he took aim at those who have criticised him this season.

Bateman had initially written on his Instagram: “In sports you dream big and never think the biggest dreams will come true.

“I dreamed of only ever playing for my country, I did that this weekend as well as captaining my country and wow what an honour that was.

“I’d just like to say a massive thank you to my family and friends, the ones who’ve been there from day one, my Mum, Nan, brother and Grandads who’ve drove me all over the country as a young nipper. That one was for you.

“And to finish, the team for going out there and getting the win.”

Bateman will start the 2022 Super League season under a new head coach in Matty Peet, who has taken over from the departing Adrian Lam. 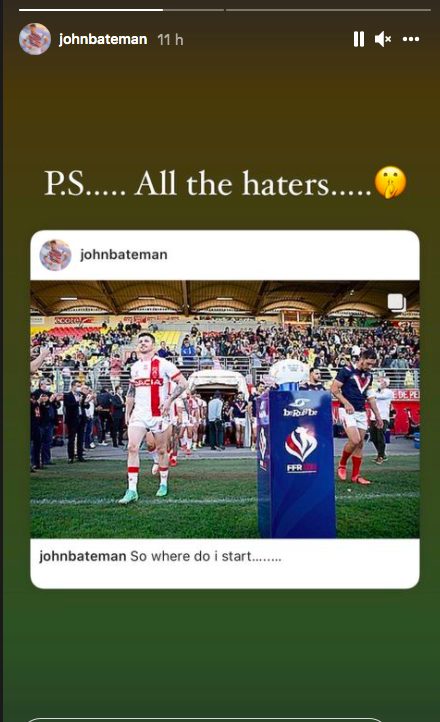