On Monday night, Love Island viewers tuned in to watch an incredibly emotional Jacques O’Neill say his goodbyes to the villa after admitting he wasn’t being the best version of himself.

Whilst coupled up with Welsh beauty Paige, Jacques has faced a rocky relationship in recent days following antics in Casa Amor – where he was faced with six different girls in a different environment – and has since been trying with all his might to repair the damage.

However, O’Neill’s mood had considerably worsened as epitomised by yesterday’s bombshell when new boy Adam Collard walked in with his eyes firmly planted on Paige.

That seemed to tip the scales for Jacques and he lost his rag in last Monday’s episode, stating towards Adam: “Have you been f**king off? Who the f**k is he? Just another geezer who’s been on the show? He can f**k off then mate.”

That behaviour worried Paige with Jacques then beginning to realise the error of his ways. And, after professing his feelings for his partner, O’Neill revealed his decision to leave the Love Island villa in one of the most emotional moments in reality TV in recent years.

Jacques was keen to emphasise that he would ‘wait for Paige on the outside’ and that he wanted her to be ‘his girlfriend.’

Radford was asked about a potential return to the Jungle earlier in the week.

“He’s been in this morning to say hello to the boys, but I don’t know who dressed him,” Radford joked to BBC Radio Leeds. “The boys were really pleased to see him – he will probably want to dip his toe back into life.”

Could O’Neill return to the Tigers after leaving just a month ago?

“It’s not something we’ve spoke about just yet as he flew home only last night,” Radford confessed.

“He’s had no sleep and he looked a bit faded and maybe it’s the euphoria of doing what he’s been doing – but all that is a conversation for further down the line.”

However, it looks like O’Neill could return to the Jungle, with Liam Watts stating on O’Neill’s big Instagram post: “Get yourself back and I’ll see you 1st of November ready for business.” 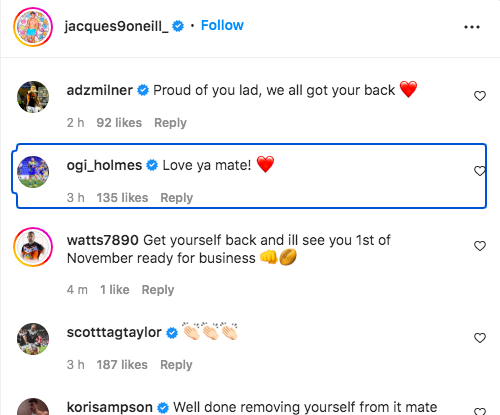