The NRL has taken a breather and boy did it need one, it’s been hectic on and off the field. It’s a feast of international rugby league injecting much needed enthusiasm into the wide world of league – it’s not all about you NRL – and give insight and information leading into the season ending World Cup. The Kangaroos taking on the Kiwis is the headline act, while the Pacific Islands will hit the field with their always colourful and enthusiastic support with Samoa looking to leave a lasting impression on some Englishmen!

The last time these two sides met was the Four Nations final mismatch, but they meet here under extremely different circumstances. The Kangaroos are missing Greg Inglis and Matt Scott through long term injury and picked Trent Merrin and Blake Ferguson on loyalty rather than form. The Kiwis have Kieran Foran and Roger Tuivasa-Sheck available and the added advantage of having the Warriors spine doubling as the Test spine. The problem for the Kiwis is Australia’s spine is also the Queensland spine and probably the best in history. It’s a case of my spine is better than your spine. Jonathan Thurston and Darius Boyd are both under injury clouds and if not at 100% it brings in the odds for the men from the long white cloud, but wild horses couldn’t pull these two from the field.

The men in black look menacing in the pack, the Kangaroos better brace themselves for a T2 attack with Kiwi terminators Jason Taumalolo and Martin Taupau aiming at them. Don’t expect David Klemmer and Andrew Fifita to be quaking in their boots, they’ll relish the contact and reply in kind. The big issue for the Kiwis has always been discipline, they get so fired up by the Haka that they’re emotions boil over and they give penalties away piggy backing the Aussies upfield. Australia are far too good for the Kiwis to allow this to happen so discipline and controlled emotion is the key.

Australia looks to have a distinct edge out wide in both attack and defence, holding the best two edge defenders in rugby league in Matt Gillett and Boyd Cordner. Cameron Smith celebrates his 50th Test cap and in combination with the players embracing Mal Meninga’s pride in the green and gold jersey hand Australia a winning mentality. RISE is the Roos theme meaning ‘Respect. Inspire. Selfless. Excellence.’ and the Kangaroos hold this mirror to themselves every time they represent. For the Kiwis to cause an upset, their forwards must dominate to give space and time to Foran and Shaun Johnson to weave their magic. Australia have living legends Thurston and Smith surrounded by a whole lot of class and professionalism. The Kiwis have the skill but it’ll be the Kangaroos pouching another victory.

This is must see rugby league, this will be a bottler! This will be final act of the Pacific Test trilogy played out in Sydney’s west on Saturday night and the quality will increase with each part unlike Lethal Weapon or Mad Max, parts of the greater West resembling the desolate scenery of Mad Max 2 to ignorant minds in the luxuriant East! Wayne Bennett has surprised many by selecting the ‘Aussie Chris’s’ McQueen and Heighington, but they’re both eligible and proven performers in the NRL. Bennett is after results not friends. At last count, he was well ahead in the results column though not on the English ledger.

England have chosen a good balance of NRL and Super league players, whether a couple of training sessions together gives them enough time to gel we’ll see but the big picture is the World Cup. Expect Josh Hodgson and James Graham to run the show, with Luke Gale and Kevin Brown to add their touch of class late in the tackle count. Gale has been in grand form, at the on-fire Castleford Tigers, while Brown will enjoy being away from Warrington’s wobbles for a week.

James Child opens up on how coming out impacted his career

Samoa has chosen an extremely dangerous side, full of talent, toughness, and skill. Anthony Milford is the jewel in the crown and could be the thorn in England’s side. After missing out on rep footy last year he will out to impress as will Joey Leilua and the centre clashes will be exciting and an area Samoa will look to exploit. The forward clashes will be fiercely contested and with a pack containing Junior Paulo and Sam Kasiano, the Samoans have both size and skill. England keep calm and carry on but pack spare underwear!

Samoa will come out all fired up and look to put some big shots on and lay off second phase ball unleashing Milford and Leilua. If England can withhold the opening salvos, they have 80 minute hard hitters in Sam Burgess and Elliott Whitehead who have huge work rates and will rack up huge tackle counts. Josh Hodgson’s clever ball playing could open the Samoans up and look to Zak Hardaker to zip through a tired Samoan ruck.

Samoa will throw everything they have at the English but England has a huge point to prove after failing to reach the Four Nations final and this is the first step towards what they hope is the land of World Cup glory.

If you like passion, theatre, colour and excitement then tune in to this one. The footy will be tough and ad-lib which is forced on all the Pacific Island nations especially as they rarely get together as a group and have limited preparation and virtually no combinations, and then in Tonga’s case, have Andrew Fifita taken by Australia at very late notice.

This match is dripping with talent in the backlines in particular. The battle of the custodians will be a cracker with Tonga’s Will Hopoate making a brilliant return from injury last weekend for the Bulldogs, while the Storm’s electrifying gravity defying winger, Suliasi Vunivalu wears the number 1 for Fiji. Vunivalu with open space and room to move at the back could be a sensation and with Billy Slater’s career in its twilight this could be an early audition to capture Craig Bellamy’s attention.

The front rows cancel each other out but Tonga has the edge in the back row with the T-Rex Tony Williams ready to turn Campbelltown Stadium into Jurassic Park. The Tongans also have X factor off the bench with the Titans super sub, Leivaha Pulu wreaking havoc when he enters the arena. 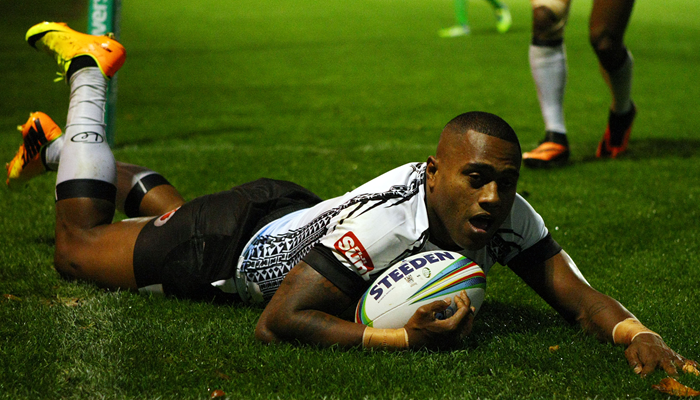 Fiji have speed to burn out wide with Akuila Uate in superb form but he needs service and Fiji look lightweight in the halves with Taane Milne at 6. Tonga have a really impressive side and expect the Tongan Tango to break out in the stands at the final whistle.

The festival of Pacific Islands footy and culture begins on Saturday with this clash. The Cook Islands are the minnows of the region but always contain a sprinkling of NRL players. Their team will look to the Isaac John, Sam Mataora and Alex Glenn in particular to lead from the front and their countrymen will look to them to provide inspiration.

Papua New Guinea have a massive advantage over their rivals as the majority of their team play together week in week out for the PNG Hunters in Queensland’s second tier Intrust Super Cup. The Boas brothers, Watson and Ase, starred in the halves in the match against Fiji last year. They are packed with skill and will move the ball around looking to get early ball to Dragons star Nene McDonald.

As with all the Pacific Island sides, the Cook Islands will show pride in the jersey and the people they represent but the combinations in the PNG side should see the Bird of Paradise flag flying highest.

This game has been turned into a farce with so many players being ruled out and pulled out I wouldn’t be surprised if one of the bench spots for Country is filled by the local bingo winner. City had to pluck Jake Marketo out of reserve grade! The last ever City Country game and Des Hasler sets the bar lower than ever by disrespecting the tradition and pulling his players out, so proud country boy Josh Jackson cannot farewell this game in his hometown of Mudgee. Des I don’t condone booing and fully understand your reasoning but you are officially off my Christmas card list, as are the NRL schedulers who put a game on the following Thursday which brought on all this malarkey, use your overpaid brains more intelligently please.

Predicting the winner of this game is a lucky dip as both are full of fantastic players despite the withdrawals but neither side will have had more than a couple of practice runs. It is a big game for players like Matt Moylan and Paul Vaughan window shopping their NSW Origin chances, while someone like Paul Gallen is throwing a line out to see if Laurie Daley bites. I’m just interested to see what type of football moves Anthony Don comes up with this week. I’m tipping a Stanley Matthews dribble with Ronaldo step over, followed by a nutmeg on Josh Addo-Carr.

Now an exhibition game more than an Origin trial, let’s hope the players put on a great show for the league loving people of the bush and both teams enjoy the week of goodwill spreading the league gospel and old fashioned warm country hospitality. The final game will bring the best out of the boys from the bush.

Enjoy the footy and remember gamble responsibly. I’m going to sit back and soak up the pre-match rituals and war challenges of the Island nations. It is pure theatre and creates a brilliant highly charged atmosphere. It might be something both Australia and England could look into. The Kangaroos could maybe borrow from the Indigenous All-Stars war dance to respond to the Haka, while picture it now: Rugby League World Cup final and Sam Burgess leads the English team with some Morris dancing, frightening on all fronts.