Last night, rugby league was rocked by an admission from former Wigan Warriors, Leigh Centurions and Wakefield Trinity prop that he had taken drugs whilst playing the sport.

In a tell-all interview with ITV, Wilkes has gone on record to document his taking of performance-enhancing drugs.

“I used to see people who I was as good as, then all of a sudden come back after a pre-season massive. I’d never say what club, what name. And then just see ’em absolutely tear it up,” Wilkes told ITV.

“They were quite slow at the start of pre-season, just a bit heavy and then shred up a bit. I assume they’d be clean by this point and avoided being caught…”

That led Wilkes to ‘try’ the drugs himself.

“I signed for Whitehaven and I was only training two times a week, and they’d offered me alright money and I thought to myself, I was like: ‘Should I have some, see what all the fuss is about?’

“So I tried a performance enhancing drug, a banned one, and six weeks into the season I got a phone call off Wigan, to sign for Wigan. And, uh, I thought to myself: ‘Well’, I thought: ‘It worked.'”

However, following some backlash, Wilkes. has now gone on record to reveal just how daunting speaking out was but that it was absolutely necessary for his own mental wellbeing.

“Please take a look at this, not once did I say what I had taken but I did take a performance enhancing drug in my career. Only I know what that was and nobody else, UK Anti doping don’t even know if it was band when I took it. Sky can speculate what they want stating falsely it was HGH or peptides, they are wrong. I had nothing to gain and everything to lose from speaking out, however I suffer with mental health following retirement from 21 years of rugby! No contact since retiring from rugby may I add, no medical treatment for two useless shoulders, bent finger, broken bones scars! Brain scans to identify potential early onset of dementia!
“Please watch the clips and make your own mind up! I have spoken out for the benefit of the game and the lives of the future stars! Please don’t be afraid to comment and share your view! I know it’s a problem in rugby league and players will always be one step ahead! I’m not embarrassed at all I never cheated regularly over my career but I did and It helped me! Or did it just level the playing field??” 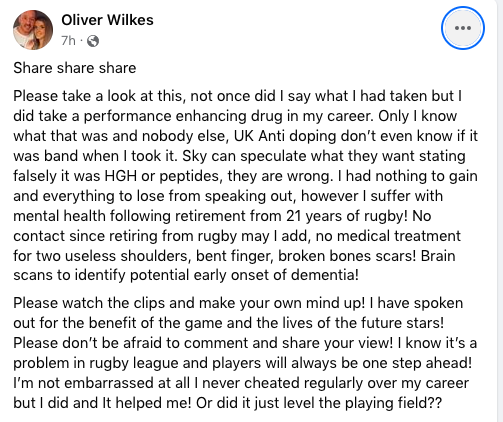