Jake Connor, fresh from impressing in Denver, has signed a new contract to keep him at Hull until 2021.

England international Connor has lit up the Super League this season, covering a plethora of positions whilst the Hull team came to terms with big losses all around the park, due to injury.

The news will come as music to the ears of Black and White fans after Albert Kelly, Carlos Tuimavave, Fetuli Talanoa, Masi Matongo, Jordan Lane and Brad Fash all signed contract extensions earlier this year.

In just the season and a half since signing from the Huddersfield Giants, Connor has become a vital part of the Hull side, and even has a Challenge Cup winners medal to his name.

He has six tries and ten assists, in the domestic campaign, as well as recording a debut try just last week for the international side.

Connor said: “It’s a massive relief to know that I’ve secured my future here at Hull FC for the next three years because I love it here.
“There is a great culture going on behind the scenes here that maybe the fans don’t get to see. It’s like a big family.
“I’m very fortunate to have played for Hull at such a young age because I have learned so much and that was helped by how quickly I settled into the squad.”
Lee Radford commented after the announcement: “The talent was clear to see when he was at Huddersfield and it was fantastic that we could get him here in the first place.
“He simply caught our eye with a few of the things he did and he still does things that leave us speechless.
“He can catch the ball off his chest, throw passes with just one hand, give balls out the back door. He is a very talented player.
“It’s a fantastic bit of business from the club because he’s a fantastic player.
“After a brilliant first year for us, he’s gone on to become even better and hopefully he can continue to perform consistently and shine in the big games.” 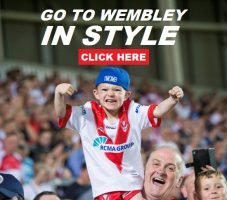