Five Bradford players have joined Hull KR for a fee thought to be around £100,000.

The deals are expected to help Bradford’s financial situation following their takeover yesterday.

Half-backs Joe Keyes and Rowan Milnes, back-rowers Elliot Minchella and Matthew Storton and prop-forward Anesu Mudoti have all signed three-year deals with the Robins from 2020.

As part of the agreement, Milnes will be loaned back to the Bulls along with another Rovers player for the entirety of next season. 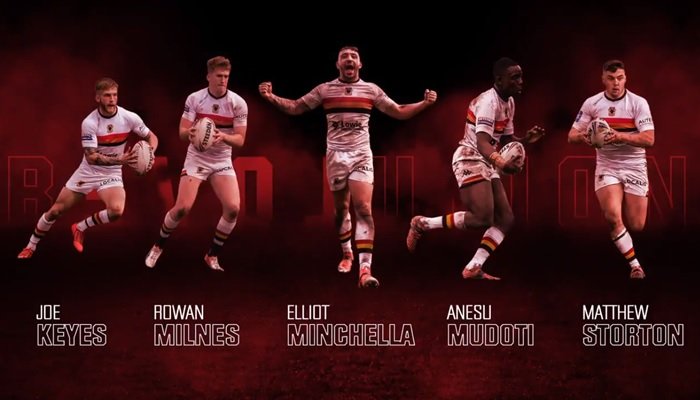 Tony Smith told hullkr.co.uk: “We are delighted to have these five players on board, and it was important that the deal benefited both clubs.

“To add young, ambitious and talented players is what we are striving to achieve and each of these signings are exactly that.

“The additions give us depth and choice in positions, which in turn gives us competition for places. To have people in form and playing well is an important part of our strategy for next year.

“Regardless of their experience, if they are doing their job, they are in consideration for the first team. They all see themselves as Super League players of the future and some have ambitions to go even further than that.

“They fit our recruitment remit and we are delighted to have each and every one of them on board at Hull KR.”

Hull KR CEO Mike Smith added: “We are happy to assist in Bradford’s preparations for the 2020 campaign, and the decision was made to loan Rowan Milnes back to the Bulls for next year to continue his development, whilst also loaning an existing Robins player,” Smith explained.

“The considerable fee involved, including loaning Milnes back to Bradford as well as one of our own players, shows that we are committed into helping Bradford remain sustainable in their ongoing rebuilding process.

“We all want to see a successful Bradford team and give them every chance of achieving their goals in 2020.”