Just over 20 years since Prescott made his debut for the Black & Whites, the club have brought out a  retro shirt based on the design he wore in his first season at the club in 1998/99. 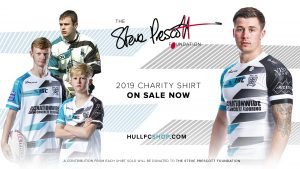 The shirt will be worn at Hull FC’s annual Heritage & Memorial Weekend at their final home game of the regular season, which fittingly is also the final leg of the Steve Prescott Trophy against St. Helens, another of Prescott’s former clubs.

Aside from making 107 appearances for Hull across two spells with the club, scoring over 600 points including 56 tries, Prescott is now also synonymous with his incredible charity work which lives on through the Steve Prescott Foundation.

? Inspired by a legend, @StevePrescott1…

Introducing our limited-edition 2019 charity jersey, modelled on our 1998 home shirt in which Prekky made his club debut, which will be worn when we face @Saints1890 next month!

A donation from each jersey sold will be made to the charity which raises funds for Try Assist, which aims to support players whose lives have been affected by serious injuries.

They also continue support Christies Hospital, where Steve was treated before he passed away after a courageous seven-year battle with pseudomyxoma peritonei, a rare form of abdominal cancer.

Prescott raised an incredible £500,000 before he passed away, whilst the Foundation has gone on to reach over £1.6 million for charity.