Rugby league players know that a career in the sport isn’t that long.

If they are really lucky with injuries, a career could last 20 years, but the rest of their lives needs to be filled by something else – whether it’s within or outside of the sport.

A number of rugby league stars recently have gone into property – the likes of Featherstone Rovers’ Jesse Sene-Lefao and former Castleford Tigers star Quentin Laulu-Togaga’e won Tryline Property – whilst others like Warrington Wolves’ Josh Charnley and Hull FC’s Jamie Shaul have outlined their intentions to go into the building trade.

For Castleford star Greg Eden, property looks to be the name of the game, with his Greg Eden Properties already doing well.

But, it also appears as though the flying winger – who is out of contract at the end of the 2022 Super League season – is ready to learn a thing or two from Sene-Lefao and Laulu-Togaga’e.

The trio were snapped on a Zoom call yesterday afternoon talking all things property with Sene-Lefao revealing that he “loves helping the boys out.”

Big things could well be expected following rugby league, but Eden, for now, is set to go all out in trying to impress new head coach Lee Radford for a place in the Tigers squad for 2022. 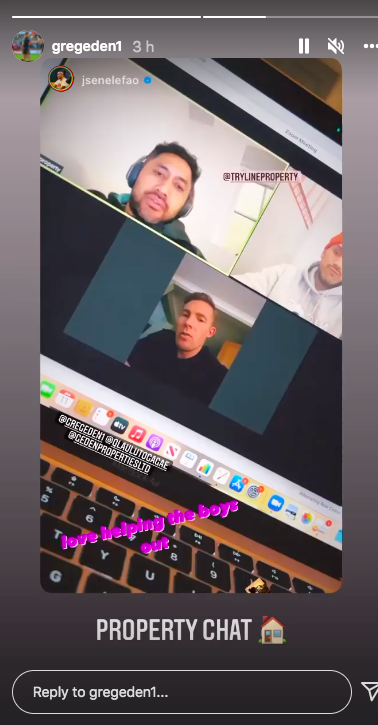