It’s been one of the most talked-about news items in the past week or so, but Luke Thompson’s anti-vaccination stance has been praised by a number of current and past rugby league stars.

And, one of those is former Huddersfield Giants, Leeds Rhinos and Hull KR hooker Shaun Lunt who, despite not giving his own opinion on the vaccination rush, has praised the ex-St Helens forward for sticking to his guns.

Lunt said: “Fair play to him whether it’s right or wrong in your eyes it’s his decision and I admire him sticking to this! Too many people get bullied and bent over a barrel!”

That statement was followed with three hand clapping emojis as Lunt shows his obvious support for Thompson in his controversial stance.

The only trouble now is the fact that the whole saga around vaccination protocol has led some NRL clubs to take legal advice about whether sacking a player could be done if they refuse the vaccine.

Players scheduled to return but not vaccinated will be refused entry by some Sydney clubs under New South Wales county health orders, which means that those players will be given home training regimes – like Thompson.

The story has opened up a can of worms surrounding the COVID-19 protocols and where the NRL goes from here. 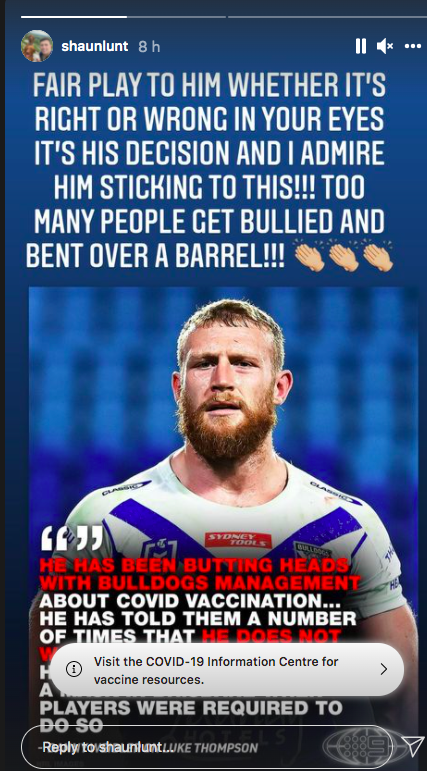