Congratulations Hull FC! The Black and Whites put in a determined performance to claim the Challenge Cup for the second year in a row. You’ll often find in such big games, it’s the halfbacks that can prove to be the difference and Saturday was no different. Hull scrum-half Marc Sneyd was outstanding and deservedly picked up the Lance Todd trophy for his efforts.

The Irish international dictated play all afternoon and proved to be a real handful for the Wigan defence. His running game completely outshone opposite number Thomas Leuluai, while his kicking was sublime. The 40/20 he kicked out of nothing that set up Fonua’s second try really summed up his afternoon. It was a team effort from FC, but Sneyd led from the front.

Perhaps one of the most poignant images from Saturday was of Mahe Fonua donning his beloved Tongan flag on his back whilst carrying the trophy. I even saw a tremendous caption of it on social media that read “some heroes do wear capes”. Sneyd took many of the plaudits for his side’s win but Fonua and fellow Tongan winger Fetuli Talanoa were equally as good.

Defensively they were solid all game, making the correct reads and making good impacts in tackles. In fact, Wigan’s tries only came from poor defensive decisions from those further in-field. When both carried the ball you knew they would make plenty of metres and would be tough to put to ground. Fonua, of course, will find pastures new back in Australia next year but him and Talanoa will be vital if FC are to win anymore silverware in 2018.

A game of inches

As per usual, the game wasn’t short of controversy. Tony Clubb and Mahe Fonua both had tries disallowed, with the Wigan prop’s being a major talking point. The decision was certainly a harsh one, as it was pretty clear that Carlos Tuimavave helped to dislodge the ball from Clubb’s grasp before he grounded it. But alas, it was given as a knock on and the try was chalked off.

This wasn’t the only moment that nearly changed the game. Joe Burgess’ brain explosion when he chose to kick ahead from a break late on could have had a big effect, as could George Williams’ forward pass to Liam Farrell before he sent Burgess away for another disallowed try. But fair play to Hull, they worked hard all game and kept their cool when the pressure was on, which really sealed them the game. 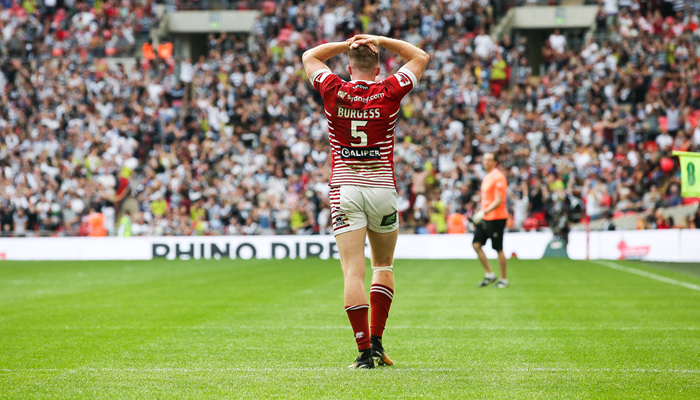 Liam Marshall’s memories of the Challenge Cup final will probably be rather mixed. Not originally included in the matchday 17, you can imagine his delight when told he was playing just 20 minutes before kick-off, after Tom Davies pulled out of the warm-up through injury. Despite the excitement, it didn’t turn out to be the best afternoon for the youngster, who was constantly bullied by Sneyd’s kicking game and Hull’s intense attack.

He was clearly emotional after the final whistle, as can be expected by someone losing their first final. They key now, though, is to keep his head up and push on. If anything, the loss should whet his appetite for success in the future. Marshall has been one of Super League’s brightest rookies this year, so here’s hoping Saturday’s final doesn’t knock his confidence.

Hull weren’t the only team to win a trophy this weekend. Over 4000 miles away, the Atlanta Rhinos came from behind against the New York Knights to win their first ever National Title. It was USA international Terrance Williams who grabbed all the headlines, with his impressive hat-trick of tries inspiring his team to a 32-18 victory.

2017 has been the USARL’s most successful season to date, with games becoming more competitive and interest in the sport growing rapidly. Toronto may be leading the way in Canada but there’s an extremely exciting competition just further south that more people need to be made aware of. The upcoming World Cup will give America a chance to showcase it’s talent and hopefully that will have a knock-on effect to give their domestic competition more involvement and publicity.