Andrew Fifita’s family have taken to Instagram to speak about the Cronulla’s star injury.

Latu, Andrew’s brother, shared the emotional post seen below, with other brother David sharing it on his own profile with a series of love hearts.

Andrew has been placed in an induced coma in a Brisbane hospital intensive care unit after suffering a significant laryngeal injury on Sunday, but he is said to be stable.

The forward was reportedly suffering from breathing difficulties due to a severe swelling of the larynx, with a surgery a real possibility for the forward.

About 20 minutes after the game ended, a distressed Fifita was brought out of the changing rooms and onto the field, where he was examined by paramedics before being taken to hospital by ambulance.

Cronulla’s narrow 16-14 defeat to Newcastle left the Sharks in tenth position and with their play-off hopes fading with every passing game.

Fifita had been linked with a move to Wakefield earlier in the season but that failed to materialise, with the prop forward closing in on 200 appearances for the Sharks.

Capped seven times by Australia, the 32-year-old has been in and out of the Cronulla side this year, but under Josh Hannay, Fifita has established himself in the side. 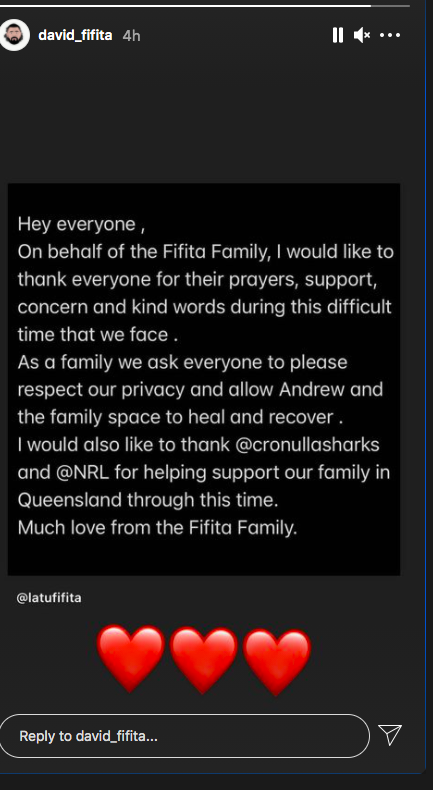