For overseas stars heading home just before the start of pre-season, the dread of a two-week period of quarantine has been huge.

The likes of Warrington Wolves’ Gareth Widdop, Castleford Tigers’ Cheyse Blair and Hull FC’s Josh Reynolds have all documented their trials and tribulations locked in a hotel room for a fortnight without any outside communication.

Now it is the turn of Featherstone Rovers star Connor Jones who is in quarantine just as his West Yorkshire club returns for pre-season.

Jones has been a key figure in Featherstone’s attempts to obtain promotion from the Championship, becoming a firm fan favourite since moving to the Millennium Stadium midway through the 2019 season.

The hooker played a major rule that season as Featherstone just narrowly missed out on promotion after a final loss to the Toronto Wolfpack.

Jones was handed a Super League contract at the Salford Red Devils following that, but became just a bit-part player for the Lancashire outfit, returning to Rovers ahead of the 2021 season.

But, now he has been snapped doing a hotel room workout with a pair of dumbbells – which is a lot more than what many other stars have had to occupy their time.

For Featherstone, it’s the start of a new era under incoming head coach Brian McDermott. 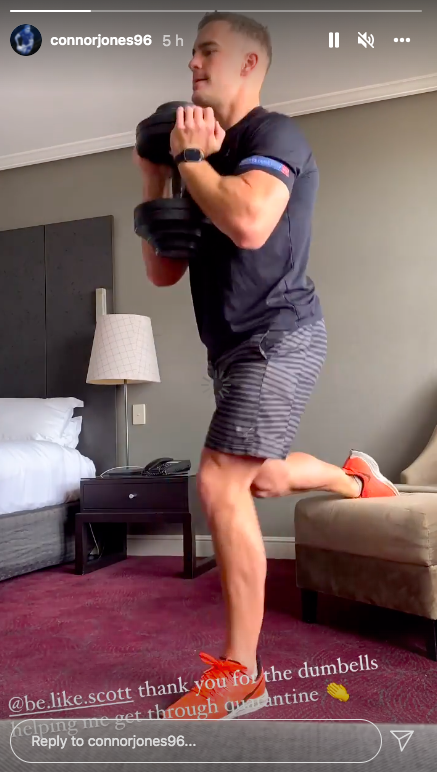