Featherstone Rovers’ Joey Leilua made his presence felt in his debut for his new club last night – even if it was shortlived.

The former Canberra Raiders and Wests Tigers centre lasted just 12 minutes, but produced an incredible try-assist to get Rovers fans purring at the thought of more to come.

Leilua was forced off with a hamstring injury as a precaution on what was a very heavy pitch, with head coach Brian McDermott confirming that the powerhouse centre was sent for scans today.

Featherstone’s Millennium Stadium was packed with over 4,500 spectators – a wonderful crowd considering the weather, the date and the fact that it was broadcast on Premier Sports also.

And, for new recruit Leilua, it was the best atmosphere he has ever been a part of as he posted on his Instagram story. 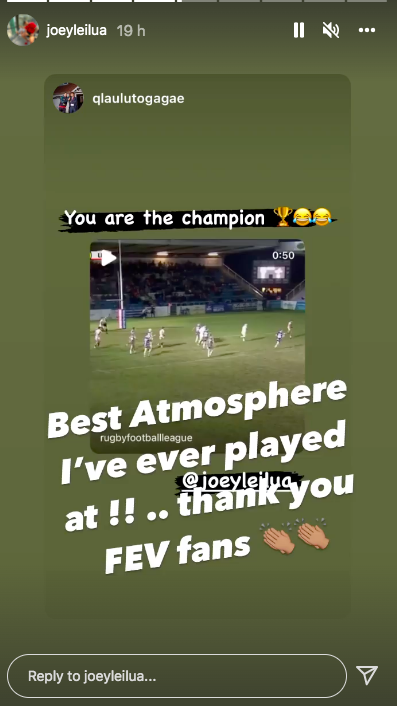 Leigh were, ultimately, outclassed by their opponents who thrived despite the boggy, awful conditions.

Rovers ran out 28-6 winners after going into a 16-0 lead at the break, with tries from Luke Briscoe, Morgan Smith, Craig Hall, John Davies and Brandon Pickersgill proving Featherstone’s authority over Leigh who only crossed once through Nene MacDonald.

It meant that Rovers have now won two from two games in the opening rounds of the Championship season whilst Leigh have a 50% record.