The rugby league family was distressed to learn that the brother of former Wakefield Trinity, Huddersfield Giants and Featherstone Rovers forward Danny Kirmond had tragically been killed on Monday night.

Police have since confirmed that a murder investigation is now underway following the death and assault which occurred outside Sharlston Rovers Rugby Club in Weeland Road, Wakefield on Sunday morning.

Police were called at 12.18am by the ambulance service to the club where Jack Kirmond had suffered a serious head injury, with a 38-year-old man taken into police custody after being arrested on suspicion of murder in connection with the matter.

DCI Sharron Kaye of the Homicide and Major Enquiry Team who is leading the investigation, said: “I can confirm that Jack has now sadly died from his injuries and this is a murder investigation.

“His family are being supported by specially trained officers and we continue to hold a man in custody.

“I continue to appeal for anyone who witnessed the assault or who can assist out investigation to contact the Homicide and Major Enquiry Team on 101, or by using the LiveChat on the West Yorkshire Police website.   The log reference is 0039 of 7 August.

“Information can also be reported anonymously to the independent charity Crimestoppers on 0800 555111 or online.”

Since then, people, supporters and clubs have paid tribute to Jack Kirmond, but the most emotional statement came from brother Danny who took to social media to share his horror at hearing the news.

Kirmond wrote: “It kills me writing this, he wasn’t 33 to me he was my little brother. The same little brother who followed me round everywhere when I was younger. The one I always thought I could after and protect, he was the uncle who made my daughter smile and still ask if we can go see uncle Jack. He was my mum and dad’s baby, a soldier, a cheeky bleeder, a bad golfer, worse drinker, but more than all that he was my little brother who I loved more than he could ever know and he has been taken too soon. 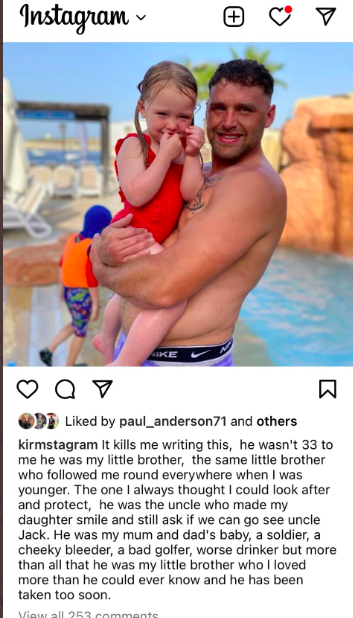 Everyone at Serious About Rugby League passes on their condolences to Danny and his family and friends.