Luke Gale made headlines yesterday when he was unveiled as Keighley Cougars’ latest signing ahead of the 2023 Championship season after promotion from League 1.

Gale has now taken to Twitter to make a small statement on his excitement about the move.

He said: “Looking forward to this next challenge. Can’t wait to get started.”

Gale has been a major transfer in three of the last four seasons.

In 2020, he was Leeds Rhinos’ answer to the halfback problem they had had since Danny McGuire’s move to Hull KR and he soon assumed the captaincy and led them to the Challenge Cup trophy.

In 2022, Hull FC let go of legendary halfback marc Sneyd to bring in Gale and now Gale is a statement signing for Keighley Cougars going into 2023.

But this move came about like no other. It was all down to the fact Gale went into pre-season training by himself after taking some time off.

As he trained, he bumped into Rhys Lovegrove and things spiralled from there as Gale revealed on the club website:

“Things have been a bit different for me this season as it is the first team that I have ever gone into a pre-season without a deal at a club.

“I made the decision to train by myself and give myself a couple months out of Rugby League after playing and training for 14 straight seasons.

“I have been training at Driven Athlete with Chris Black and as a result have bumped into Rhys Lovegrove quite often.

“When I’ve spoken to Chris, as I know Blacky quite well, he told me that I would really enjoy myself if I signed for Keighley.

“I’ve met and spoken with Rhys a few times now and he is one of the best young coaches within the game right now and we just clicked straight away.” 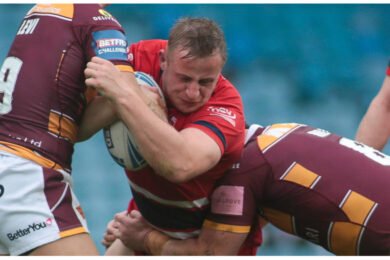