Love him or hate him, Ryan Bailey was part of the Leeds Rhinos team that was unstoppable towards the back end of the 2000s and into the 2010s.

Winning six Super League titles between 2002 and 2014 as well as three World Club Challenges and one Challenge Cup, Bailey made a reputation for himself as a hard-nosed enforcer who sometimes let his emotions get the better of him.

However, no one can deny that he played a key role in Leeds’ Super League dominance around the turn of the 2010s, but his spells at clubs after 2014 were less successful.

From Warrington Wolves to Castleford Tigers, from Toronto Wolfpack to Hull KR, Bailey just couldn’t settle at another club and hung up his boots for good in 2019 after failing to make an appearance for Featherstone Rovers.

Since then, the 38-year-old has kept a keen eye on rugby league – none more so than his former club Leeds whom he regularly talks about on social media.

It is on social media where Bailey has, however, hinted at a possible stunning rugby league return.

Not only has he posted a poll on his Instagram story asking whether or not he should return to the sport, Bailey also sent out a tweet that said: “Training for a comeback let’s go!!” 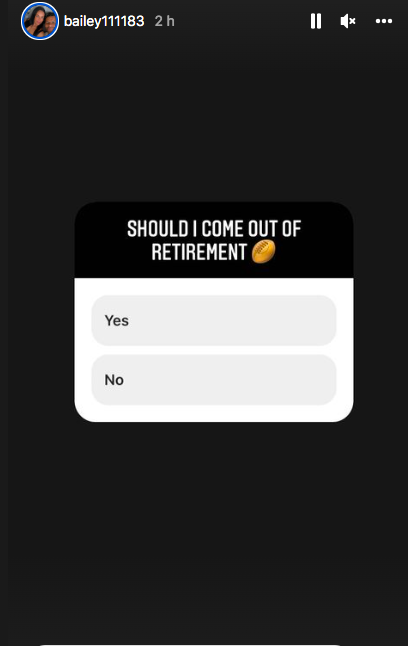 It remains to be seen whether or not Bailey is merely teasing his audience of followers, but it would be interesting to see whether someone at 38 after years out of the sport could make a return and do it well.