That is the reality of starring in a popular TV show that is watched by millions around the globe.

Stardom now awaits O’Neill – who ditched rugby league side Castleford Tigers for the glitz and glamour of the Love Island villa two months ago – with over a million followers on Instagram ensuring that any promotional post will hit the £10,000 mark.

The 23-year-old has also signed up to The Social PR – the UK’s fastest growing Public Relations company – to be mentored with former Islander Scott Thomas which could see him become a millionaire.

And, when asked about a potential return to the Castleford Tigers, head coach Lee Radford did not see a potential deal for the rest of 2022.

“I spoke to him on Sunday, but it was just general chat really, a catch-up about the life of a superstar.

“We’ve not really spoke about him returning – he’s got an awful lot going on and I think what’s important is that he does everything while he can. I don’t know how long that will last.”

That being said, a deal may not come about at all if O’Neill’s Instagram profile is anything to go by – it now says ‘ex-professional rugby league player.’

However, O’Neill was once again spotted at the Jungle over the weekend with star forward Kenny Edwards managing to get a picture with the former Castleford man with his son, again fuelling speculation that the 23-year-old could still be hankering over a contract for 2023. 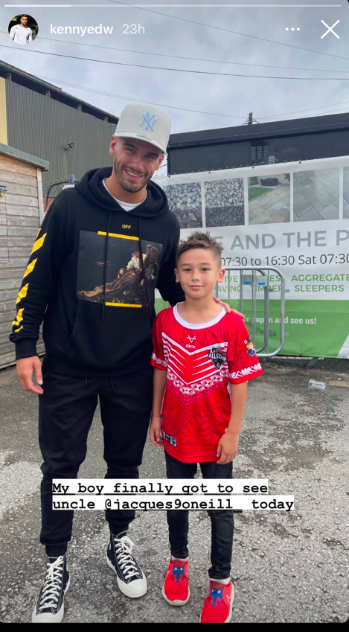