Hauraki left KR at the end of the 2020 Super League season after being confirmed that he would not be offered a new contract.

The former Super League second-rower went back home to New Zealand following that decision and has since been keeping his head down out of the limelight.

However, for the first time, Hauraki has revealed that he is indeed still playing the sport – for local side Dannevirke Tigers where he was born back in 1985.

The Kiwi began his career at Parramatta Eels in 2007, making 32 appearances before leaving for Welsh side Crusaders RL in Super League.

From there, he impressed enough to be given a contract at Leeds Rhinos where he played a key role in Leeds’ Grand Final winning exploits in 2011 and 2012 – though he didn’t actually play either final.

A contract at the Castleford Tigers soon beckoned alongside his cousin, Rangi Chase, who needs no introduction.

Hauraki became a real fan favourite at the Jungle, being a key player in the Tigers’ ascent to the top four under Daryl Powell as well as to the Challenge Cup Final in 2014 where they narrowly lost out, ironically, to Hauraki’s former team, Leeds.

The New Zealander was at Castleford for two seasons before leaving for the Salford Red Devils, then the Widnes Vikings before signing for Hull KR in 2019 in what proved to be his final Super League contract.

All in all, Hauraki made over 200 appearances in the UK top flight.

Now though he will be playing for Dannevirke after posting on his Instagram: “Round 3 for the Dannevirke Tigers Rugby League Club mens prems team vs Linton Cobras Rugby League Club looking forward to a good tough game. Hope to see everyone there supporting us if you’re not doing anything Saturday.” 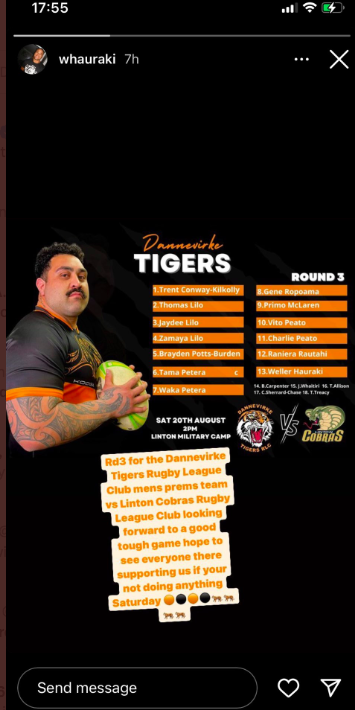