Get excited England your lads have already made a great impression on the NRL! It was a fantastic start to the season for the English stars on show, with the Rabbitohs and the Raiders both having strong victories and their great Brits were shining brightest. Friday night saw the Bunnies bounce the Roosters with Sam Burgess having a stormer. Living up to his nickname, Slammin’ Sam pulverized the Premiers and added 173 running metres and a try for good measure. Brother Tom also put in a strong effort, running for 143m and just a fingertip away from adding his own meat pie to the tally.

On the Glitter Strip it was the Raiders who sparkled in the torrential rain that battered the east coast all weekend. Josh Hodgson looked very fit and sharp leading the Green Machine to a shutout of the Titans, his grubber for Sia Soliola on the stroke of halftime pushed the visitors to a 10-0 lead which they never looked like surrendering. The star though was the debutant John Bateman, built small externally but within holds a heart the size of Yorkshire. Check these stats Bateman ripped out: 154 running metres, 36 tackles, 5 tackle busts and best of all in conditions making the ball resemble a bar of soap – zero errors!

It wasn’t such a pretty weekend for the Dragons Englishmen as Gareth Widdop and James Graham got caught in the eye of Tornado Taumalolo. The Cowboys behemoth, Jason Taumalolo scattered the Dragons like ten pins though Widdop was one of the best in a losing effort. While a rung below NRL in the QLD Intrust Super Cup, Herbie Farnworth managed two conversions in Norths Devils 30-12 loss to a rampant Easts Tigers and Chris McQueen played the full 80 minutes for Wests Magpies in their 23-4 win over Blacktown Sea Eagles in the NSW Canterbury Cup.

Back in the NRL, now I don’t like spreading scurrilous rumours, but I think I saw a Fox League promo that had Wayne Bennett smiling in it! It may also have been because Souths won in Bennett’s first Book of Feuds clash and surely had nothing to do with his off-season verbal sparring partner Anthony Seibold’s Broncos being broken by the Storm. Let’s move on to preview Round Two, ding ding. 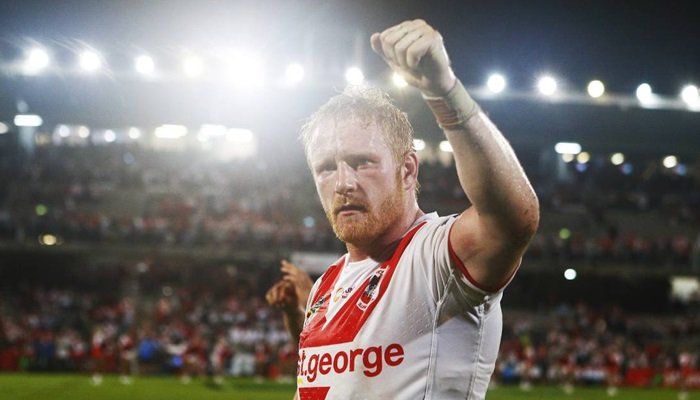 The second round opens with a bell ringer with the highlight from an English point of view the battle of the Brits – Slammin’ Sam Burgess and the Ginger Ninja, James Graham. Two of the hardest men in our game come face to face and it’s Graham and his Dragons who have to come out breathing fire as they were towelled up in Townsville by the Cowboys and don’t want to start 0 and 2. Making things worse for the Red V, Tyson Frizzell joins Jack de Belin on the sidelines after lacerating a testicle last week, Holy Cojones!!!!!! I’m wincing just typing it! With Frizzell sitting on the lounge wearing a bag of frozen peas for underwear the weakened Dragons will need Graham to lift his men to give the dangerous Saints spine something to work off. Gareth Widdop can’t achieve much behind a beaten pack. The Bunnies were brilliant last week with the Burgess boys ripping and tearing setting up Adam Reynolds clinical kicking game which cooked the Chooks. Souths look set for a big season with Sam Burgess starting on fire and the Dragons down on ammunition will have trouble dousing the Rabbitohs English talisman. The Saints only have a five-day turnaround and travel to contend with in a contest they were already not favoured to win. Benny’s Bunnies to burn the Dragons. Rabbitohs by 14

The Raiders quartet of Englishmen get a taste of top drawer NRL as the mighty Melbourne Storm blow into town. As good as John Bateman was, he’ll need to step up a notch but this tough man will embrace the challenge. Josh Hodgson was fantastic last week and his deluxe dummy half duel with the best in the business Cameron Smith is a mouth-watering and potentially match defining clash, usually when facing the Storm whoever rules the ruck wins. Hodgson schemed, kicked superbly and hit hard in a complete performance, he’ll need to repeat to get the Raiders to salute again. Elliott Whitehead had a poor opener with his hands but we’ll blame the slippery conditions, his combination with Joey Leilua is always a key and if they get decent field position look out for the potent Green Machine to blast into gear. For the Storm expect Cameron Munster to rain bombs all night on rookie fullback Charnze Nicoll-Klokstad, while his opposite Jahrome Hughes made life after Billy Slater look easy and his light footwork in heavy traffic will cause the Raiders no end of trouble. Big Nelson Asofa-Solomona will look to make life in the nation’s capital a nightmare for Bateman, Hodgson and Ryan Sutton, when he gets on, in the crucial middle third. Fail to control the ruck and instead of the victory song, the Brits will be singing and dreaming of ‘Life in a Northern Town’. But these Englishmen are made of stern stuff and can cause an upset, especially with the amazing recovery and return of Jordan Rapana 10 weeks early! The wing battle will be worth the admission price alone: Nick Cotric and Rapana v Suliasi Vunivalu and Josh Addo-Carr! Who wins? Who cares just enjoy the razzle dazzle! Raiders by 4

The Queensland derby is always a ripper but add four ex-Broncos to the Cowboys lineup and the mercury level spills over. It’s always fiery and Josh McGuire and Jason Taumalolo going hammer and tongs with Tevita Pangai will be must-see TV, even south of the border. After Taumalolo’s superhuman effort last week, 301 running metres – I repeat 301!!! – the Broncos will need to pack kryptonite in their shoulder pads to subdue him, you can’t stop him, but you must stem his stats, or the momentum gives classy playmaker Michael Morgan too much room to groove. Anthony Seibold wants the Broncos to play fast and open rugby league, hard to implement against this Cowboys unit and this early in the Brisbane system overhaul but it will be explosive if Anthony Milford ignites and James Roberts cuts loose. Failure to light the wick could see the Broncos caught in a stampede and a second loss on the trot brings unwanted early season pressure to Seibold’s tenure. Back home at Suncorp can Kodi Nikorima and the MILF turn on the expected huge crowd and lead the Broncos into the winner’s circle? Anticipate another QLD derby classic. Broncos by 2

Two first up losers meet, and the Sharks will be pleased to get back to the Shire after being haunted in the Hunter by the Knights, but their new side will take time to turn into a cohesive unit. Shaun Johnson will get better week after week, and he’ll look to stamp his class on this contest. The Titans begin a three-game road trip and will be desperate to grab a win inside the first month or the head start they’ll give sides will be too great to reel back in. They had excuses against the Raiders losing Ash Taylor before kickoff and Tyrone Roberts after just 5 minutes and Garth Brennan would have been pleased with the effort. With Ryley Jacks and AJ Brimson deputising for their number one halves pairing the strong Titans pack need to take it to the Sharks or this could ugly… actually, this will get ugly. Matty Moylan and Shaun Johnson are ready to rumble, while Andrew Fifita will shake the ugly tree causing the Titans to hit every branch on the way down.

What a ripping halves clash on offer, the Knights Kalyn Ponga and Mitchell Pearce take on the Panthers James Maloney and Nathan Cleary but the best battle will be in the engine room. Hurting after an insipid display in the western Sydney derby the Panthers will be fired to the max but will need to be to dominate the David Klemmer led Knights who grow an extra leg in front of their fervent supporters. The Klemminator will fast become a cult figure in Newcastle and his monster high octane hit ups need to be stunted by Penrith. Reagan Campbell-Gillard is the pack leader and if RCG doesn’t aim up the Panthers will fall short of their target, a first victory of the year. Starting fast might help the Panthers cause too as continually chasing big leads given up far too easily won’t cut it! Have the viral video troubles at the foot of the mountains released a season killing virus on Penrith? Ivan Cleary will hope it’s not contagious and the side just had a shocking first stanza last week, we’ll know more come Saturday night. Panthers by 4

The Sea Eagles were sloppy in the soggy conditions last week and there’s only one thing worse than facing a dark Des Hasler at training after an ordinary loss, facing the reigning Premiers, the Roosters rebounding from a poor performance. The Tri-colours were out-enthused and outplayed by the Bunnies so expect a huge output from their big boppers. If Latrell Mitchell can pocket the pushing and pouting and just play the spectacular footy he is capable of he will obliterate the Sea Eagles, early ball from Luke Keary to both Latrell and Joey Manu will be the order of the day. At home Manly should improve and can score plenty of points but need all the 50/50s and the dice to roll in their favour. The Chooks to get their title defence off and running, the Sea Eagles to roll snake eyes. Roosters by 26

I know it was only Round One but boy the Bulldogs are staring an extremely long season in the face if the Warriors whipping is de rigueur in downtown Dog Town for 2019. Luckily a week is a long time in the NRL (hopefully a scandal free one too) and Dean Pay will demand a massive overhaul in effort and attitude. Seeing traditional rivals, the Eels, 10 yards away should fire the Dogs of War up and get them in the mood for a scrap. Parramatta won’t take a backward step and will be skipping into training this week after upsetting the Panthers. Club debutants Shaun Lane and, particularly, Blake Ferguson were superb. Fergo started where he left 2018, in career best form. If he isn’t currently the best winger in the game, he’s on the podium, hopefully not back flipping onto it – Brad Arthur must internally flip out every time Blake takes off. Kieran Foran was quiet in Auckland last week and his pack will need to set the Kiwi a decent platform or Mitchell Moses will lead the Eels to an unlikely 2 and 0 start to a season everyone thought they’d struggle. Applying NRL logic in large dollops, I’m backing a Bulldogs bounce back factor. Bulldogs by 7

35 is the new 25, well that’s what Robbie Farah’s display last week screamed. The Tigers old boys Farah and Benji Marshall showed all their experience to take the game by the scruff of the neck and win it when it was there to be taken. Michael Maguire has Tiger Town ticking off the calendar to every home game they’re so bouyant. The mood helped by half Luke Brooks running with confidence and that’s great signs for Wests. The Warriors will be a great test, they were awesome in their opener to life without Shaun Johnson. The forwards marched downfield and the generational ying and yang halves, the old campaigner Blake Green and debutant Adam Keighran dominated and destroyed the dismal Dogs. With the forwards rocking, Roger Tuivasa-Sheck rolling and Solomone Kata smoking the Warriors will like their chances of mauling the Tigers. One thing we know about these Tigers, they won’t roll over and let you tickle their tummy. This will be tight. Warriors by 4