Will the train wreck of a summer affect attendances and TV ratings like it has sponsorships? League Central will be tuning in with fingers crossed, rugby league in Australia is back on our screens and we can enjoy what the players do best, entertain. The NRL has coined it ‘a new era’ let’s hope so because the last one ended like the dinosaurs, blasted by a self-inflicted meteor showering the game in sh… shame. The NRL is currently more of a mess than Brexit and that’s saying something! Season 2019 is here, strap on your boots, there are eight Englishmen in action in round one, giddy up let’s go!

The Storm has owned the Broncos in recent seasons and will start firm favourite despite the retirement of Billy Slater who will have a grandstand named after him pre-game. A magnificent honour for one of the game’s all-time great fullbacks, expect Cam Smith to have a ref’s whistle and Craig Bellamy a high-pressure hose sprayer named after them when they depart. Cameron Munster will want to exorcise the demons of last year’s shocking Grand Final performance and lead the Storm into the new era where the Big Three is down to the Big One, an ageing Smith heading towards 400 – watch them sparkle. For the Broncos, a new beginning and new system under Anthony Seibold, which may take time to adjust to hence the Storm at home with a settled side to get the job done and start 2019 like they generally do, on fire. Storm by 8

What a cracking start to the first Friday night football, the early kickoff in the Hunter Valley will be a humdinger. The amped up Newcastle fans are salivating at the prospect of potential finals footy and drooling at the match ups highlighting this clash: Kalyn Ponga v Shaun Johnson, The Klemminator v The Wrecking Ball – David Klemmer v Andrew Fifita. There’s so much X Factor on show even Simon Cowell would give it the thumbs up (begrudgingly). So much interest lies in how the new look sides will settle and there’ll be a matchstick in this. The Sharks have been in the spotlight with talk of their 2016 premiership being won by nefarious means, all that has done is wave a red rag to the Shire’s bull, Paul Gallen, but with The Klemminator revved up to 11 and Mitchell Pearce pulling the strings backed by a monster crowd it’s the Knights for mine. Knights by 1

A blockbuster at the iconic Sydney Cricket Ground with Sam and Tom Burgess wound up by Rabbitohs, England and Great Britain coach Wayne Bennett, there’ll be more big hits than there were at the ground during the Big Bash over summer. Can the dodgy SCG turf torn up last week by the Super Rugby survive this monster mash of fierce foes? George Burgess misses out suspended for the opening three rounds after the controversial eye gouge in the Test series v the Kiwis. The NRL speaks of a new era but this traditional rivalry features a clash of era’s as the generation game is being played out in the centres as the past is meeting the future. Wayne Bennett has moved Greg Inglis to the right so GI can take down his youthful doppleganger Latrell Mitchell, a star in his own right taking his own path to league immortality. The Roosters have only played the one meaningful pre-season game defeating Wigan so the Chooks may be undercooked but facing the Bunnies will blow any cobwebs off. Souths may take time to adjust to a change in style but Benny’s Bunnies look strong on paper. A potential Grand Final preview six months early it’s the premiers to poach the two points though both coaches will just be happy if the players survive the SCG surface. Roosters by 4

With neither team expected to hit any great heights this season this is not a Grand Final preview. The keen interest in this game is how the Warriors adjust to life without talisman Shaun Johnson. Rookie Adam Keighran nabs first dibs on the role alongside the key player for the Warriors, Blake Green. Will David Fusitu’a retain his try scoring heroics without Magic Johnson feeding him? Though tipped by many to end up with the wooden spoon the Bulldogs opening 17 is very strong especially in the pack and if Kieran Foran is fit and firing the Doggies can open the season with bite. I’m loving the backrow battle watch out for Tohu Harris (Warriors) and Raymond Faitala-Mariner (Bulldogs) are both game breakers and great to see them both fit after injury affected 2018’s, while off the bench Corey Harawira-Naera can tip the scales Canterbury’s way but the Warriors with RTS, Roger Tuivasa-Sheck leading the way will have too many points in them. Warriors by 6

Both sides have lost some glamour and match turners with both custodians, Moses Mbye (Tigers) and Tom Trbojevic (Sea Eagles) ruled out through injury. Interesting news out of Tiger Town with old timer Benji Marshall securing the five-eighth jersey over Josh Reynolds who hasn’t even made the 17! He’ll be playing in the reserves with Chris McQueen though both were named in the 21 man squad so they’re in new coach, Madge Maguire’s future plans. Neither side is expected to go great guns this season which is sometimes good as they can fly under the radar and both have enough firepower to trouble any side. Despite missing Tommy Turbo the Sea Eagles look to have the edge in this one led by Marty Taupau and Addin Fonua-Blake up front, Api Koroisau blasting out of dummy half and with all this second phase play and momentum Daly Cherry-Evans orchestrating an opening victory. Sea Eagles by 8

Talking new era, well life minus the immortal in waiting Jonathan Thurston hits Townsville like a cyclone as the Cowboys saddle up welcoming a Dragons side led by the brilliant Gareth Widdop and including the raging ageing James Graham whose clash with new recruit Josh McGuire when he bursts off the bench after the softening up period will be anything but soft! Memo to Saints gaffer Mary McGregor: please leave Jimmy out there until Josh comes on, warning: it will be immense and may scare small children. Michael Morgan takes the reins as Cowboys chief playmaker after JT’s departure to a less achy breaky pasture, playing NRL is a hard way to earn a crust. Morgan’s match up opposite Ben Hunt will be pivotal to this result. With Jack de Belin stood down the Dragons look light on taking on the might of this Cowboys pack featuring a cavalcade of representative players and starring the boulder with shoulders, Jason Taumalolo who the Dragons must stop rolling up field or it will be a long night. The Cowboys have struggled to score tries and it will be intriguing to see if Paul Green has finally updated the playbook to include offloading the ball, maybe the pages with expansive play had glued together due to the tropical humidity. Gareth Widdop is the key to Saints success but even a five-star performance from the Englishman may not be enough. Cowboys by 2

A western Sydney derby headlines Sunday footy, you do not want to miss this one, so if you’re out with the family set the record…actually maybe don’t mention recording around Penrith, it’s a touchy subject. On paper the Panthers have by far the stronger of the two sides but have the video nasties, charging and standing down of Tyrone May affected this proud club? The footy field may be the place to escape and let off steam, if so, look out Parra! It’s a tough game to debut in for Eels boom rookie Dylan Brown but the wraps are huge and the youth of his generation are generally brash and consequence free in thinking so expect Brown to showcase his skill. Eel recruits Shaun Lane and Blake Ferguson will be pumped to impress and Mitch Moses desperate to show Brad Arthur he is the man to lead the Eels out of the quicksand they were trapped in last season. The Panthers though are a tough and talented side and the halves of James Maloney and Nathan Cleary are of the highest quality and will pose too many questions the Eels won’t answers for. Panthers by 12 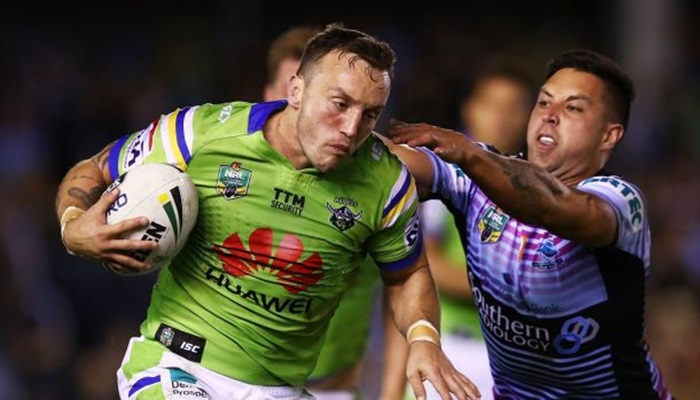 Great news for English fans of the NRL, all four Englishmen have been named for the Canberra Raiders.  Josh Hodgson and Elliott Whitehead start in their usual positions of hooker and second row, while John Bateman has, as expected, been selected at lock and Ryan Sutton on the bench after impressing in the trials. The Raiders look strong but are also an unknown prospect due to a few new names and positional changes, Jack Wighton picked at 6 and former NZ 7’s rugby player Bailey Simonsson on the wing, who I can’t wait to watch. Anyone who has played rugby for NZ whatever the format has gotta be good! The Titans will see this as a must win as they have a tough three game road trip following this and will be banking on their impressive forward pack to lead the charge, this is where the Englishmen kick in. The Green Machine’s English lads are more Land Rover tough than Aston Martin sleek and they’re rough and ready for NRL action and out to do a number nullifying the Titans big men. Fail to do so and the Titans have good strike power out wide which key playmaker Ash Taylor can unleash but the Raiders have incredible try scoring weapons of their own and off the back of the Green Machine’s new model fresh off the production line pack, debut co-captain, Josh Hodgson will lead a successful northern raid. Raiders by 7 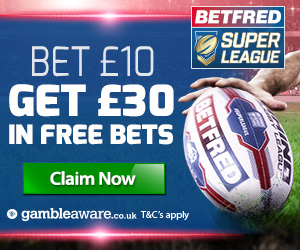 Andre Savelio has returned to Super League signed by Hull FC, a victim of the coach swap between Wayne Bennett who brought Savelio to Australia and Anthony Seibold who told him he was free to explore options, in other words you’re not part of my plans. While Broncos development player Herbie Farnworth scored a double and kicked 4/6 in Norths Devils 28-22 opening round victory of the QLD Intrust Super Cup. Finally there’s word the Raiders are close to adding Wigan’s George Williams to the English horde in the nation’s capital next season, though apparently the Green Machine are baulking at the hefty transfer fee. If the deal realises it’ll mean there’ll be five Englishmen playing for Canberra in 2020… instead of the Viking Clap, Raiders fans will all be singing ‘God Save The Queen’ before kickoff!

Radford unhappy with second half