England and South Sydney Rabbitohs star Sam Burgess has been named in the NRL Team of the Decade.

The line-up consists of the best players to play in the NRL over the past 10 years and includes the likes of Jonathan Thurston, Cameron Smith and Greg Inglis.

He moved to Australia in 2010 and has since made 172 appearances for the Rabbitohs in two spells.

The team in full is:

Fellow Englishman and former St Helens captain James Graham was also in contention, and has been named in the ‘Team of the Decade 2nd XIII’. 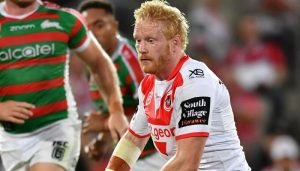 The 33-year-old made the switch down under in 2021 and has gone on to play over 150 games for Canterbury and St George.

The 2nd XIII has been named as follows: