Sean O’Loughlin has been awarded an OBE in The Queen’s Birthday Honours for his services to Rugby League.

The Most Excellent Order of the British Empire is a British order of chivalry, rewarding contributions to the arts and sciences, work with charitable and welfare organisations, and public service outside the civil service.

O’Loughlin’s award follows on from his 19-year playing career and his two years so far as an Assistant Head Coach at the DW Stadium.

The one-Club man had an illustrious playing career, playing 459 games and winning 10 major honours with Wigan.

Revered by colleagues and opposition players with many pointing to him as one of the modern greats, O’Loughlin was one of the most respected, consistent and inspirational players of the Super League era and captain of both Club and Country.

The Wigan Hall of Famer led the Club to its first major titles in eight years, winning the League Leaders’ Shield and the 2010 Super League Grand Final, before going on to win another eight major honours, including the 2013 double and the historic World Club Challenge title in 2017. He was also named in the Super League Dream Team a record seven times.

On receiving an OBE, O’Loughlin said: “It’s a strange one for me. You never expect anything like that. It doesn’t enter your mind that you could get one. It does feel strange when I’ve done something I’ve enjoyed doing for so long.

On the invitation to Buckingham Palace to receive his OBE, he said: “I’ve seen pictures of other people doing it in the past and what the occasion is – it should be great and it’s something I look forward to doing.

“When I received the letter, it had a Royal emblem on it. I thought it was a speeding ticket at first! It came as a bit of surprise.”

Warriors Executive Director, Kris Radlinski, said: “Sean is such an unassuming superstar. He is admired by teammates and opponents alike. He has played Rugby League for Wigan to such a high standard for many years but the most impressive thing is the manner that he has gone about it.

“He is a quality human being. Everybody wants him to be in their team and then everyone wants him to be their mate and have a beer with him. The balance of his career is admirable. To be finally recognised by the monarchy is such a fitting tribute to an all round great guy.”

Wigan Head Coach, Matt Peet, said: “I’m very proud. It’s so fitting. We see him as a Wiganer and everything we want the Club to stand for – Sean epitomises it in his hard work but mainly his humility as an outstanding player and one of the best players in our Club’s existence.

“He’s continuously the most humble man in the building and that’s why we love him. He’s just a top man and someone everyone in the Club can learn from and does learn from on a daily basis. He’s turned into a fine Coach as well.

“I’m just glad he’s on our team, he deserves the accolade. It means everyone in the Club and in the game can celebrate a real positive role model for Rugby League.”

And, now England boss has hailed O’Loughlin as the ‘best ever’ on his Instagram profile after learning of the news. 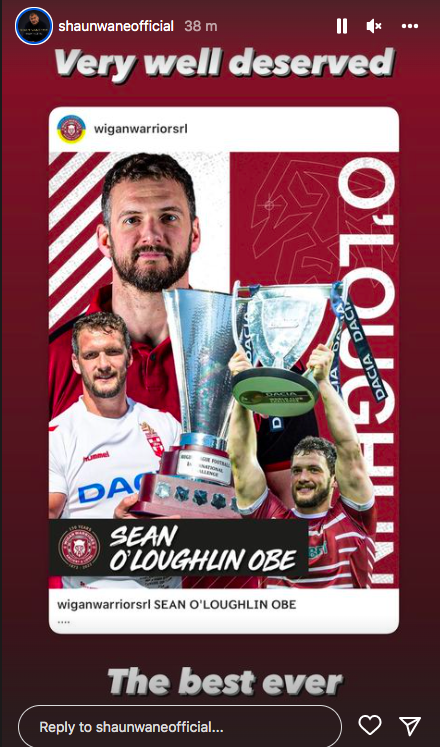