The Challenge Cup final of 1968 is famously remembered as the ‘watersplash’ final, as torrential rain played havoc with the Wembley pitch. Conditions were treacherous and made for a gritty West Yorkshire derby as Leeds and Wakefield put on a battling display. With the players getting bogged down on the sodden pitch, kicking became vital and Leeds took advantage to lead 4-2 through penalties. It was Trinity though who managed to score the opening try, as the heavy rain saw Leeds’ John Atkinson slip and Ken Hirst was able to capitalise.

With both sides struggling because of the weather, Leeds went back in front thanks to a penalty try awarded for obstruction before Bev Risman converted another penalty with two minutes left to make it 11-7. Not prepared to go down without a fight, Wakefield came back for one more push straight from the kick-off. Hirst burst through the Leeds line to go over under the posts for his second try, and all Don Fox had to do was put away what looked like a routine winning conversion. However, in a cruel twist of fate, the conditions made the telling contribution. As Fox stepped up, he slipped and skewered his kick wide. It was one of the most heart-breaking moments in Challenge Cup final history and ensured that it was Leeds who would get their hands on the famous trophy.

We all know about Wigan’s dominance in the Challenge Cup between 1988 and 1995, but back in 1985, they gave the Wembley crowd a little taster of what was the come. Before the big kick-off, Wigan’s opponents Hull FC sprang a major surprise when Arthur Bunting chose to leave Garry Schofield on the bench. It was a tactic that seemed to work early on when Kevin James crossed for a try. However, Wigan soon levelled and took control. John Ferguson went over to tie the score before Brett Kenny and Henderson Gill went on to make it 16-8 at half-time. Kenny was in superb form and the Warriors looked like they had the final sewn up early in the second half as tries from Shaun Edwards and Ferguson saw them lead 28-12.

Hull weren’t finished though and staged a late fightback to make it one of the most exciting Challenge Cup finals of all time. With Peter Sterling and Schofield off the bench, Hull looked a different side as first James Leuluai went over before Gary Divorty added another try to pile the pressure on Wigan. The last few minutes saw a titanic battle, with Wigan clinging on after Leuluai’s second try of the afternoon left Hull FC just four points behind. Hull pressed for a potential winner but ultimately fell short, unable to break a determined Wigan who held on at the death. 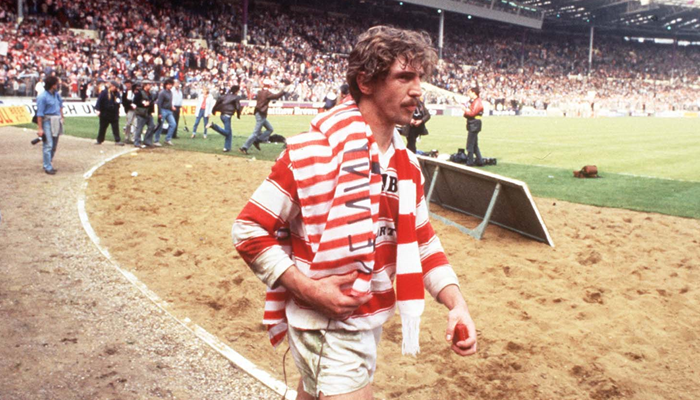 Over the years the Challenge Cup has provided its fair share of fairy tales and Halifax’s famous cup win over St Helens in 1987 certainly fits the bill. They had shocked everybody to win the title in 1986 under Chris Anderson and Halifax used their underdog tag to great effect once again a year later at Wembley. It seemed that St Helens had taken them for granted as Halifax built up an impressive 18-8 lead thanks to tries from Wilf George, Seamus McCallion and the Lance Todd Trophy winner Graham Eadie. Saints replied, with Paul Loughlin forcing his way through to score but a drop goal from John Pendlebury’s put Halifax in a strong position at 19-12.

However, St Helens made sure it would be a dramatic finish when Paul Round’s neatly worked move saw him go over and Loughlin’s added conversion resulted in just one point separating the sides. It made for a grand stand finish as Saints threw everything at Halifax in an attempt to snatch victory. They almost managed to complete the comeback when Mark Elia broke through but he was denied by an outstanding challenge from Pendlebury to knock the ball clear. It proved to be a match-winning tackle as Halifax held on to lift their fifth Challenge Cup.

Wigan made a remarkable run of eight consecutive final wins between 1988 and 1995. Their final win in 1994 was defined by one moment that has gone down in rugby league folklore. Martin ‘Chariots’ Offiah is the name that everyone remembers after the winger scored quite possibly the greatest try ever in a Challenge Cup final.

With the score at 0-0, Wigan were under huge pressure near their own line.  Offiah somehow managed to single-handedly break through the line and what happened next thrilled a bumper Wembley crowd. Using his blistering pace, he cut the Leeds defence to ribbons and sprinted the length of the field to open the scoring in sensational fashion. The sheer speed, poise and power of the try was poetry in motion and helped Wigan on their way to a seventh Challenge Cup win in a row.

There is a saying that records are meant to be broken and the Challenge Cup final of 1996 saw St Helens do just that. No side had ever come back from 14 points down in a cup final before and the Saints ensured that record came to an end against Bradford in what was the first Challenge Cup final since the formation of the Super League. Despite two tries from Steve Prescott for St Helens, Bradford took a slender 14-12 lead into half-time thanks to Robbie Paul. The Bulls dominated after the break, with Bernard Dwyer and Paul again going over the line to make it 26-12 just before the hour mark. However, one key tactical battle would see the Saints make Challenge Cup history.

Bulls full-back Nathan Graham was tormented by Bobbie Goulding’s high bombs and his inability to deal with them allowed the Saints a route back into the game. Mistakes from Graham allowed Keiron Cunningham, Simon Booth and Ian Pickavance all to take advantage and turn the game on its head. Suddenly St Helens found themselves 30-26 up, having only moments earlier been dead and buried. Further tries from Danny Arnold and Apollo Perelini added the icing on the cake to help clinch their first Challenge Cup since 1976. 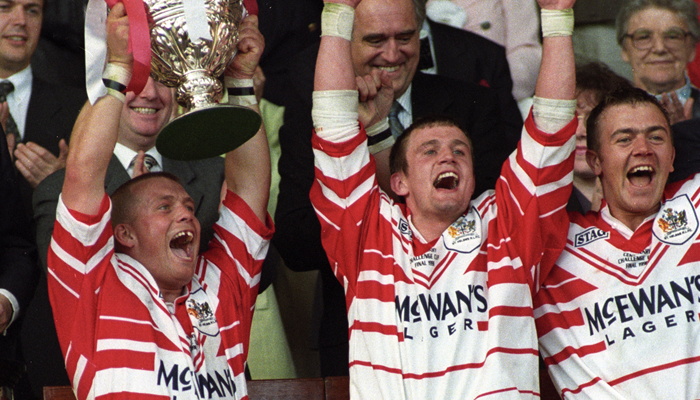 Games between Bradford and Leeds always provide a fantastic spectacle and the Challenge Cup final of 2003 certainly didn’t disappoint. With Wembley out of action, the sides headed to Wales for the first time in the cup’s history with the showpiece event held at the Millennium Stadium. A pulsating first half saw the sides reach the break all level with Robbie Paul and Lesley Vainikolo crossing for Bradford while Gary Connolly and Chris McKenna scored for Leeds.

The second half saw more of the same with Brian Noble’s side managing to get their noses in front thanks to Jamie Peacock’s try before a Paul Deacon penalty opened up an eight-point lead. Leeds fought back to close that gap to within two points before the final reached a pivotal moment when Kevin Sinfield had the chance to level the game. Instead of taking the two points, the Leeds captain chose to go for the match-winning score. It was a decision that would prove costly. The Rhinos failed to break down the Bradford defence and the Bulls held on to lift the cup.

Challenge Cup finals always have the potential to produce drama right till the final whistle and this game definitely ticked that box. Leeds came into the match as defending Super League champions and were in search of their first Challenge Cup final victory in six years. Hull FC, coached by John Kear who led Sheffield to their triumph in 1998, were very much the underdogs. A tense first half saw both sides trade tries but Leeds suffered a major blow when their decision to play Keith Senior, despite doubts over his fitness, backfired.

Senior was only able to play half the game and things went from bad to worse for Leeds when Marcus Bai offloaded in his own in-goal area straight to Richard Whiting to put Hull FC ahead. Despite Senior’s absence, the Rhinos still possessed plenty of class and Mark Calderwood scored a stunning solo effort before Bai thought he’d grabbed the winning try. However, Hull weren’t going to be written off and went on to snatch victory at the death thanks to Paul Cooke. Brough then calmly added the two to send the Hull FC faithful into ecstasy. 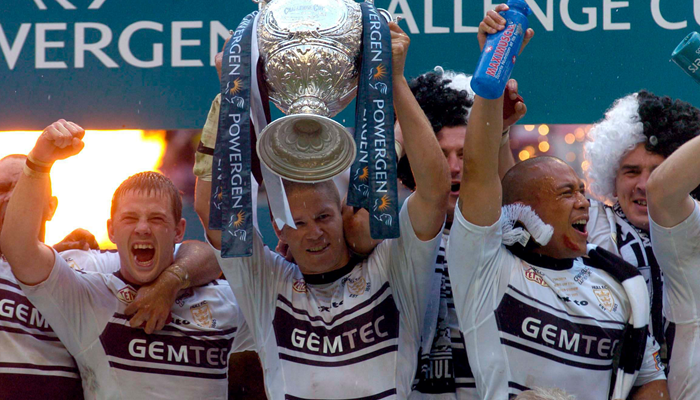 Hull had previously won the Challenge Cup three times in 16 finals but a win at Wembley had always eluded them. The Wolves were confident about their chances having won three times at the rebuilt Wembley, with their latest triumph coming in 2012. It looked like their unbeaten run would continue as they took a 10-0 lead thanks to tries from Matty Russell and Ben Currie.

However, Hull produced a stunning comeback. Marc Sneyd, who was awarded the Lance Todd Trophy, played a pivotal role. His superb kicking game allowed centre Mahe Fonua and full-back Shaul to score after the hour, with the scum-half on hand to convert both. With two minutes remaining, Danny Houghton made a try-saving tackle to deny Currie and ensure the trophy would be going to the Black and Whites. After two previous failed attempts, captain Gareth Ellis was finally able to lift the Challenge Cup for the first time.