James Child will take charge of the Super League Grand Final between Castleford Tigers and Leeds Rhinos on Saturday.

The Wakefield-born official was praised for his performance during last Thursday’s semi-final between Castleford and St Helens and will now referee his first major final.

Child, 34, officiated his first professional game in 2006 and was promoted to the RFL’s elite refereeing squad for the 2010 Super League season.

Phil Bentham was referee for the Challenge Cup Final earlier in the year but he will be the video referee for Saturday’s match in Manchester.

Meanwhile Ben Thaler, who took charge of the Million Pound Game between Leigh on Catalans on Saturday, will be reserve referee.

On his appointment, Child told rugby-league.com: “These are the games that you aspire to work at – Grand Final night is one of the biggest in the calendar.

“The Match Officials Team has worked so hard this season, on and off the field. The level of detail everyone goes into to improve each week is outstanding, so to be chosen out of a talented group is a real honour.

“This will be the biggest game I have officiated in my career so far and one that I’m looking forward to.”

Rugby Football League Head of Match Officials, Steve Ganson, added: “This appointment is a reward for the high level of dedication, commitment and of course consistent performances week-to-week that James has shown throughout the 2017 season.” 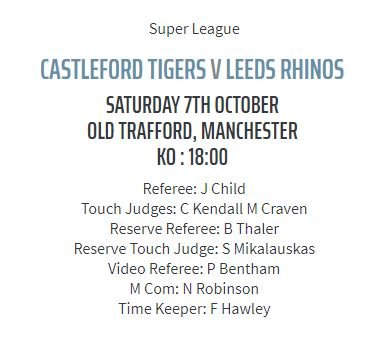