Homophobic language should not be tolerated in any walk of life, but in recent years, the rugby league governing body has attempted to clamp down hard on the abuse.

However, following the latest round of Betfred Championship, Betfred League One, Betfred Women’s Super League, Academy and Scholarship fixtures, the Match Review Panel have issued the following sanctions:

One of those, you will notice, is Sitiveni Moceidreke, who will be sent to a tribunal for ‘Grade F Unacceptable Language’, with the Match Review Panel’s minutes stating: “Law 15.1 (f) Verbal abuse based on race, colour, religion, gender, sexual preference, disability, national or ethnic origin or any other form of Unacceptable Behaviour or Language Grade F.” 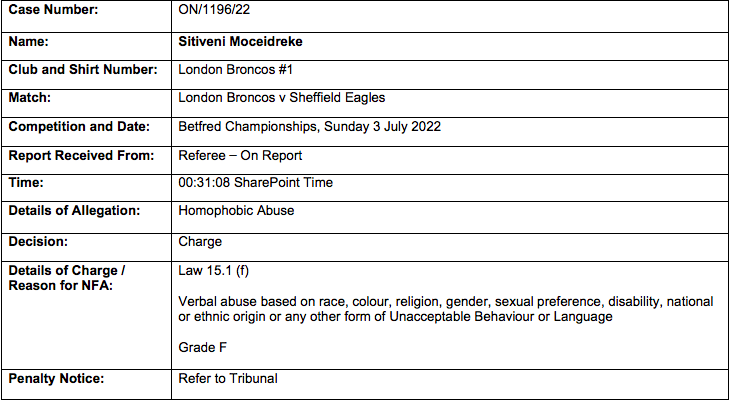 However, Moceidreke was cited for exactly the same offence in London’s incredible win over the Sheffield Eagles back in July against referee James Child.

Meanwhile, Cornwall’s Henry Aaronson has also been referred to a tribunal for a ‘testicle grab’ and could face a mammoth ban, whilst former Super League and Championship winger Kieron Dixon could also face a TWELVE-MATCH ban.

Dixon has been charged with Grade F Unacceptable Language, though, it isn’t stated what language was used.