Could Castleford Tigers have signed another player or trialist?

That’s what a number of people have been saying after seeing a snap of the pre-season in full flow under new head coach Lee Radford.

The squad was included in a video from the side of the field, but few could work out who one of the bearded players in the middle carrying his orange hat is. 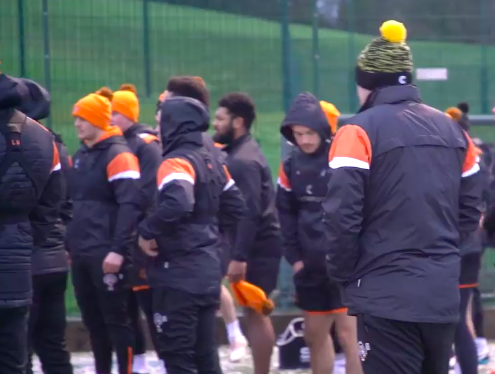 Castleford have a new head coach in Radford who has replaced the outgoing Daryl Powell – a man that was at the helm for over eight years.

With him, Radford has brought in former Hull FC stars Bureta Faraimo and Mahe Fonua, whilst Jake Mamo from Warrington Wolves brings some speed in the centres.

Second-rower Kenny Edwards could prove to be a shrewd buy out wide, with Leeds Rhinos’ Alex Sutcliffe set to fight for a spot in the back-row too.

George Lawler has joined from Hull KR, whilst halfback Callum McLelland is to battle for a place in the halves alongside Jake Trueman, Danny Richardson and Gareth O’Brien.

Native Castleford man Joe Westerman is also back at the club where it all started for the loose-forward and reunited with Radford for a second time following the duo’s time spent at Hull.

Trialist Fijian Junior Vasuitoga has already joined on a trial basis and Radford has been no stranger to handing out trials in the past.