Ahead of the Magic Weekend clash between Castleford Tigers and Leeds Rhinos on Sunday, Mike Andrews has his say on which players would get into a combined XIII between the two sides.

Let us know what your combined team would be in the comments below.

The on-loan Rhinos full-back has rediscovered his Steve Prescott Man of Steel winning form, after what was a turbulent finish to his time at Headingley. Hardaker’s current deal with Daryl Powell’s Tigers means that they have an option to buy him come the season’s end. With the England international back to his best – particularly in attack – it’ll be an absolute certainty Hardaker will be a Tiger in 2018.

In terms of stats Greg Eden would be in this team, but I believe Minikin’s all-round game is marginally better, especially when you consider he can also play in the centres. The powerful winger has scored 13 tries and made 14 clean-breaks, including making twelve fewer errors than team-mate Eden.

This maybe a questionable choice, but I feel that Watkins is getting somewhere near the form and potential that saw him so highly rated in 2011. The towering centre has 35 tackle-busts, indicating his ability to break tackles is definitely still a strong part of his game. He’s also added goal kicking to his arsenal, with ten goals this season and not all from easy angles.

Shenton has been in the best form of his career, even surpassing the performances that initially saw him move from Cas to Saints earlier in his career. He’s returned to the Tigers as a truly inspirational captain; someone that is clearly enjoying the coaching Powell has put in place, it suits his play style massively. In terms of stats it shows Shenton nail tries and assists at five apiece.

The man known as ‘World’s Best Winger’ to the Rhinos fans has improved drastically on his previous two seasons. The England international looks deadly near the line once again and he’s scoring long-range tries, which is something he hasn’t done a lot of in recent times. A lot of that was due to confidence of the team, but with confidence across the board on a high, Hall is benefitting greatly in all areas.

This is a controversial decision to place Moon in the halves over Ben Roberts, who has been fantastic for the Tigers this season. However, Moon makes the team based on how he’s revolutionised the Rhinos attack. Before his switch to the halves, Brian McDermott’s men had only scored a pathetic 52 points, including ten in that humiliating defeat to Castleford. Since that defeat, they now have the second most tries in the league and Moon’s attacking threat is at the forefront of that. To date he has nine tries and six clean-breaks. 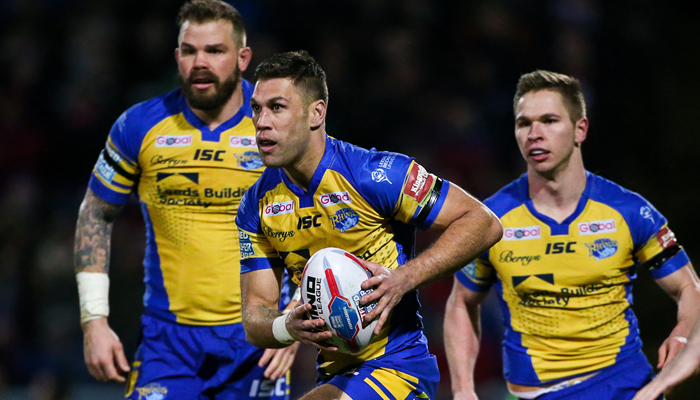 Leeds Rhinos star says culture at the club is "building"

If ever a combined team was to exist, then Gale would be the star of the team. Even when the former Leeds product is playing poorly, he still manages to post what many would consider a great display. Gale has been going from strength to strength for roughly three or four seasons since Powell took over at Castleford. In that time he’s been the Albert Goldthorpe medal winner the past two seasons and he currently has ten tries and assists to his name, as well as leading the goal kicking stakes with 63.

The forwards are where it’s so difficult to pick between the Rhinos and Cas players. Each club has a brilliant pack from 8-13 so I’ll forgive myself if I miss out someone who ought to be in. One of the prop spots goes to Millington. For several seasons the powerful forward has been largely underrated, but now I feel he’s getting the plaudits he deserves. Not as flash in the stats as most his team-mates, Millington has made over one thousand metres and pitched in for four tries and assists, for a telling contribution for the table-topping Tigers.

In my opinion, Parcell is by far the best hooker in Super League at the moment. The impact he’s made since arriving outdoes Paul McShane at Cas because of his work rate in both attack and defence. He’s notched up an impressive eight tries and assists as well as being the competition’s leading tackler with 481, almost 20 better than second place. I believe without him the Rhinos wouldn’t be sitting pretty in the top four.

‘Cuthbo’ could have been placed at loose-forward but I feel he’s been more devastating when in his accustom prop role. He’s been back to the form that saw him nominated for the Steve Prescott Man of Steel in 2015, hitting up offloads and fantastic attacking plays, usually associated with a half-back. Cuthbertson has made 53 offloads, 422 tackles, scored five tries and even made seven clean-breaks – the joint most on his team!

The newly capped England international has been truly superb for Daryl Powell. He’s a key cog in a pack that sports the likes of Junior Moors and Jesse Sene-Lefao. With that in mind, it makes his astronomical rise even more impressive. He’s scored four and assisted eight tries as well as making an absurd number of clean-breaks (seven) for a forward. If this man doesn’t make the England World Cup squad then there is something wrong.

The man-mountain forward has made the most metres for Castleford this season – standing at 1608 – and 42 tackle-busts. Those stats are sensational when factoring the Tigers outfit have been great throughout their whole squad. He’s absolutely impossible to stop and those metres gained suggest that no team has been able to work out just how to halt the behemoth. On this evidence, the Tigers forward will easily make the Super League Dream Team and make 3000 plus metres.

The former hooker beats Stevie Ward to the loose forward role after a sensational season to date. This is because the dynamic forward has become the definition of improved beyond recognition. Last season Milner was a bit-part player and used largely to give McShane a rest. However, this season he has become the man to lead from the front with his work ethic, still not flashy or spectacular, but his hard graft allows Gale and company to dismantle teams piece by piece.

Hahaha! How does Webster, Eden, Sene-Lafao or Roberts not make that team?! Joel Moon ??? Hall and Watkins good players but not playing anywhere near the standard of Webster or Eden…

I know you have to be even handed to a certain level. But Joel Moon in front of Roberts!!!