Well the moment of truth is finally here for Castleford, after weeks of playing dead rubbers due to their dominance in Super League, they reach the play-off semi-finals.

The Tigers take on St Helens for a place at Old Trafford on Saturday week, and despite finishing 17 points ahead of tonight’s opponents, they start Thursday’s live game on level terms with Justin Holbrook’s side.

Daryl Powell makes seven changes to the side that lost to Hull last Friday, as he took the well earned opportunity to rest his key players for their biggest game of the season tonight.

Crucially Luke Gale is back in a near full-strength squad,  Holbrook names Jonny Lomax and Kyle Amor in his Saints squad after both missed last week’s win at Salford.

It’s hard to judge the Tigers recent form as they’ve had nothing to play for since last month after securing the league leaders shield with week’s to spare.

They have performed admirably with nothing really at stake naming near full strength sides, until last week, but for all they have kept winning those wins came under no real pressure.

That is a luxury not afforded Saints who have had to win their last three games to sneak into the play offs in fourth place, including a fortunate win at Wakefield three weeks ago where defeat would have ended their season. 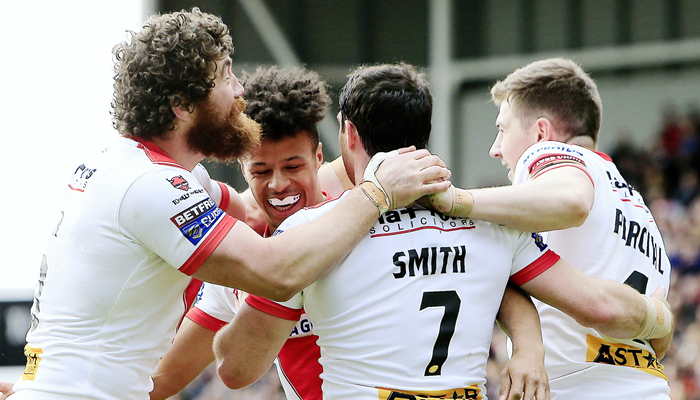 The Red V were helped by a Red Devils red card at the AJ Bell Stadium last week but looked comfortable winners anyway, Castleford rested seven players as they lost to Hull FC.

With doubts over Gale’s inclusion, bookies have been split on this one but most make the hosts around 1/2 to win this in 80 minutes and reach the Theatre of Dreams.

These sides have met three times at Wheldon Road so far this year, Castleford blasting Saints out of the Cup and winning a tight game in the regular season, with Saints gaining revenge with a win in week one of the Super 8s.

Despite winning three of their four Super 8s games on the road, Saints have been average losing 10 games away from Langtree Park.

NARL still struggling to get off the ground in North America

The defeat to FC last week was only the second time this season the Tigers have lost on home soil and I’d want more than the 15/8 available for Saints to make it third time unlucky.

The table doesn’t lie and Castleford really ought to win this one and comfortably book their place at Old Trafford.

They have to concede a 6-point start on the handicap but I feel this should really be nearer double figures and the hosts can get home by around 11-15 points.

There are doubt around Gales fitness and it’s worth noting that Hull FC’s Chris Green took double the time to come back from a similar injury.

Despite this, Ben Roberts has been equally as effective as England World Cup hopeful Gale and it’s the likes of Paul McShane that really make the Tigers clockwork tick.

There was a massive gap in league points and a fresh Castleford can take full advantage against Saints, who have done well to recover from the sacking of Keiron Cunningham and make the final four.

If you disagree with me and fancy the visitors I’d take the slightly lesser odds to make the final in case of extra time. The Tigers deserve to be in the Grand Final and by 10 o’clock on Thursday night I think they will be.

Try machine Greg Eden is 8/1 favourite to score the first try and that is decent value given his record this year. Barba is around 12/1 in the Red V.

Finally the man of the match – the big names of Gale and Zak Hardaker top the betting at 6 and 9/1 respectively with Barba at 12/1.

This game for me though will be won at dummy half by two rivals for an England World Cup spot. McShane and Roby are at 16 and 12/1 and they are my picks. Both have been in great form this year, with the latter again getting his clubs player of the year.

Gale would get the nod if his fitness was assured but he is too short if doubts remain. Other dangers include the likes of Alex Walmsley at 22/1 and 15/1 Marc Percival.

We will have a preview for the game at Headingley tomorrow as Leeds take on Hull. This is a great time of year to be a fan of our great game and we still have a World Cup to come. As always please gamble responsibly.