Huddersfield Giants and Wigan Warriors did battle in a tremendous Challenge Cup Final on Saturday afternoon.

After a highly-entertaining first-half, both sides were evidently nervous as the second-half trailed on with Huddersfield holding a slender 14-12 lead going into the final moments of the showpiece event.

But, this is a champion team under new head coach Matty Peet and a moment of magic from the Warriors’ number 7 Harry Smith – who kept veteran Tommy Leuluai out of the starting line-up – set Liam Marshall away down the wing.

And, the Wigan man was not about to let up that golden opportunity as the winger ran away, showing great composure to pick up the bouncing ball at the right time.

That sent Wigan fans into raptures as their Huddersfield counterparts sank to their names in disbelief.

Amongst the carnage, however, Wigan’s inspired overseas signing Cade Cust had already left the field with a suspected dislocated elbow as he made his way round the field in the celebrations with a makeshift shirt sling.

And, he was pictured in the sheds after the game, with his arm now in a sling though he managed to keep hold of the trophy in the other!

Hopefully the Aussie will not be out too long. 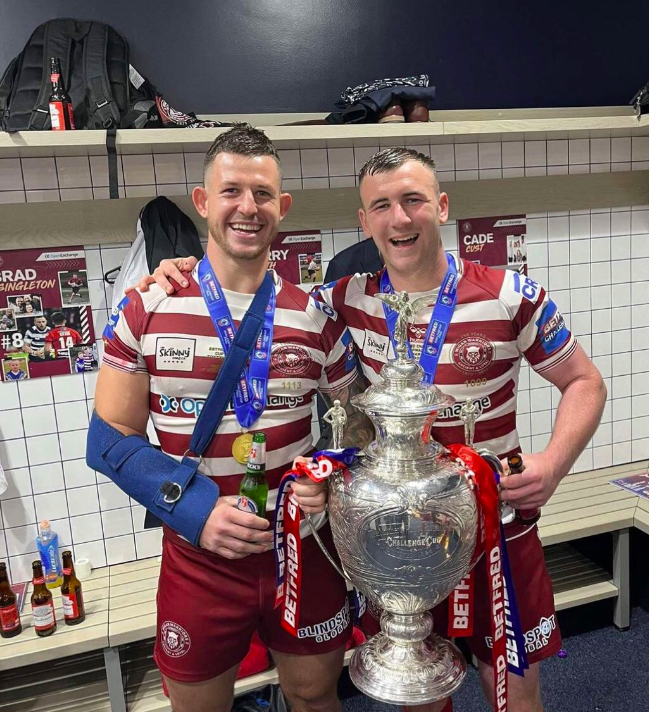