Warrington Wolves have confirmed that stand-off Kevin Brown has joined Leigh Centurions on loan for the rest of the season.

The 34-year-old has not featured at all in 2019 after rupturing his Achilles in pre-season training in January.

His contract at the Wolves expires at the end of this season and with England international Gareth Widdop joining the Wire in 2020, it seems as if he has played his last game for the club.

He will now join the Centurions on a short-term deal after being registered before last week’s deadline and will be available for the Leythers’ remaining Championship and playoff fixtures. 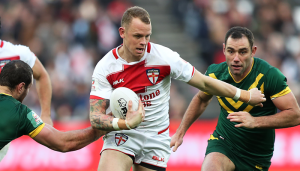 Brown has over 300 professional appearances under his belt for Wigan, Huddersfield, Widnes and Warrington, as well as picking up 10 caps for England.

“I’ve worked very hard to get back to playing after my injury and I’ve felt great for the past three or four weeks now,” Brown told the Centurions’ club website. “I’ve had a good, long chat with (Warrington head coach) Steve Price and he and Warrington have been really transparent with me.

“They’ve had to have a back up plan after the injury to Blake Austin and have signed Matty Smith and I totally get that.

“I’m gutted to leave the Wolves but it’s opened another door for me and I’m really excited about coming to Leigh. I could have sat with my feet up and got my money for the rest of the year but that’s not me.

“My brother-in-law (Gaz Hock) loved his time at Leigh and can’t speak too highly of the club and Micky Higham’s a good mate of mine and I know what he thinks of the club and the town. They both speak very highly of (head coach) John Duffy.

“I want to play and I want to play well. I’ve got a huge amount of motivation to do well for Leigh. I’ve been monitoring their results and their recent signings and they’re a dark horse for promotion.”

He added: “Kev’s a great professional who does everything right and he’s someone all the players can look up to.

“We have some high-pressure games coming up, but Kev’s played in a lot of those including a World Cup Final. He’s got a lot of substance behind him and he will be great around the group, not only this season but for the legacy he’ll leave.”