Where did the summer go?! The Betfred Super League continued into week five, with all the players given an extra battle with the weather to contend with as well as each other.

Plenty more action in round five despite such weather, all the more reason why our sport deserves much more recognition than it gets!

It could not be more obvious! Ian Watson’s Salford Red Devils side bagged the most impressive win over the weekend, with Watson the main for such heroics.

Four wins from a possible six is arguably seeing Salford as the competition’s dark horses and in France, they meant business.

A complete performance from the Red Devils as they repeated history of blanking the Catalan Dragons as Watson’s side look to upset the apple cart further.

Retaining his position at full-back is St Helens’ Lachlan Coote.

The Scottish international is slotting in as a smooth replacement for Ben Barba, having scored another try and assisted with another in the Saints’ comfortable win over London Broncos.

The 28-year-old also managed five tackle busts as well as 130 metres from 21 carries as he and the Saints remained at the top of the table in what looks to be another dominant season from the red and whites.

Lining up on both wings are Salford’s Ken Sio and Huddersfield’s Jermaine McGillvary.

Sio is enjoying an outstanding return to this country, having added another try and seven goals in Salford’s heavy win in France.

Perhaps was unlawfully denied a second try, he still worked overtime, managing 136 metres from 18 carries as well as two clean breaks, being part of a superb team effort.

McGillvary though, was crucial in Huddersfield’s win at Wigan, despite scoring no points himself.

The powerhouse tallied up over 200 metres, the highest amount from any player over the weekend as well as two clean breaks that kept Wigan at bay.

More important, it opened up Huddersfield’s 2019 account after a dreadful start and might be the kick-start they needed to contest play-off action come the business end.

At centre and returning from injury in emphatic fashion was Salford’s Jake Bibby, joined by another St Helens’ signings in Kevin Naiqama.

Bibby was another who was outstanding for Salford, scoring two tries, providing as many assists and even racked up 162 metres from 15 carries for good measure.

Not only has he been injured long term but maybe out of favour at Salford but that being the case then there was no better way at giving Watson a selection headache so hats off to him!

As for Naiqama, arguably his best game since the opening round as he too scored a try but caused havoc for London’s defence with ten tackle busts and 135 metres made.

Superb stuff from the Fijian and perhaps more to follow in St Helens’ endless amount of quality centres! 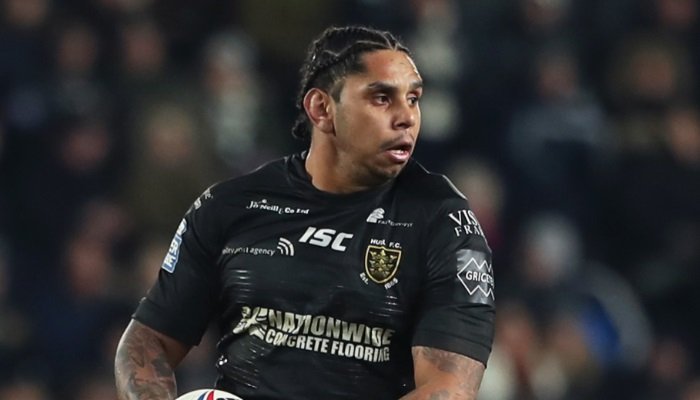 Returning to the fold after a rather quiet 2018 was Hull FC’s 2017 Man of Steel contender Albert Kelly.

Kelly did another terrific job for the Black and Whites, his assist for Ratu Naulago’s try was something else, even adding a superb individual try himself.

However, he worked overtime, completing 18 tackles, four tackle busts and even a couple of attacking kicks that heavily restricted Leeds’ attack and kept them busy in defence.

Just what FC have been lacking, the added spark that Kelly provides, as Hull made it three consecutive wins for the first time in over a year!

Another who gains his position back is Salford’s Jackson Hastings.

The 23-year-old led by example in attack yet again, scoring a try, assisting in two, managed four tackle busts, seven attacking kicks and 87 metres from 20 carries.

He and Robert Lui really cooked up some magic in France as Salford are a team not to be underestimated this season in what are interesting times ahead for the Red Devils.

The front row sees an all ‘Hull’ line-up in FC’s Scott Taylor and KR’s Mitch Garbutt.

Taylor came off the bench and added to Hull’s turn around after falling behind early to Leeds.

Having made 23 tackles as well as 133 metres from 18 carries, Taylor enjoyed his ‘early’ return from suspension and also kept Leeds blank for over 70 minutes of play.

As for Garbutt, he was another unsung hero in KR’s win over Wakefield.

He tallied 179 metres from 23 carries as well as completing 41 tackles, which takes courage considering the weather conditions played a huge part in the game.

But it is new beginnings for the former Leeds player as KR seem to be getting the best out of him as the seasons goes on.

He’s been so close every week but finally, Warrington’s Daryl Clark has done enough to be chosen!

Clark led by example against his former club; his quick thinking from acting half kept the ‘weakened’ Castleford Tigers busy, with 137 metres from 11 carries being key.

He also completed 40 tackles and as a result, the Tigers were unable to score more than just ten points as Clark and Warrington returned to winning ways in the race for the play-offs.

Another two ‘newbies’ are selected in Hull’s Sika Manu and Salford’s George Griffin.

Manu has been written off by several this season but the former Tongan international captain performed heroically in Hull’s comprehensive win over Leeds.

Having assisted with a try, managed four tackle busts as well as 119 metres from 16 carries, Manu was sensational as he terrorised Leeds’ forward park throughout.

Same could be said for Salford’s Griffin, mimicking his brother Josh at FC by bagging a spot in the team, as he notched a brace of tries over in France.

He also made four tackle busts and 100 metres in a dominant display from his team.

Impressive stuff from either forward that should set up an interesting meeting between the pair at the start of April. 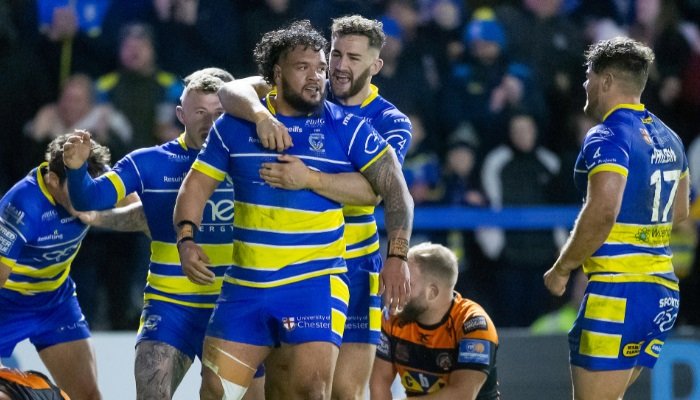 Completing the line-up is Warrington’s Man of the Match Ben Murdoch-Masila.

The juggernaut came off the bench and wore down Castleford’s pack, scoring a superb try as well as tallying up 60 metres and a couple of tackle busts for the Wolves.

The type of forward every club craves, he providing the Wolves with that added flare to end the Tigers’ unbeaten run and kept Warrington’s hopes of silverware well and truly alive!