Since 1996, Super League has graced us with some exceptional players and outstanding teams. So, in a best of the best, we have picked out a few different sides from various seasons to try and determine who is the greatest.

In 2003, Bradford were at the peak of their powers. It was the height of what was dubbed Bullmania, with Odsal packed every week to see their superstar team blow their opponents off the park with a mixture of speed, skill and power.

There was no weak area to Brian Noble’s team. They installed fear into their opponents from the back with Lesley Vainikolo and Tevita Vaikona bigger than most opposition forwards. Then there was the pack with Stuart Fielden, Joe Vagana and Jamie Peacock rampaging down the middle. But this team was by no means just about power, they had a prime Paul Deacon running things from the halves, guile around the ruck from Jimmy Lowes, and mesmeric skill in the centres with Shontayne Hape. Bradford’s interchange bench for the 2003 Grand Final consisted of Leon Pryce, Robbie Paul, Lee Radford and Paul Anderson; need I say more?

This was a side that had it all and they produced when it mattered, going on to claim the treble in 03 scoring 1149 points in the process. In early 2004 Noble’s men added the World Club Challenge to the collection, meaning they held every major honour at one time.

This team was almost unbeatable, losing only four times all season. Daniel Anderson led the Saints to the League Leaders Shield in his first season, but it was a year later in 2006 that he could build the team he really wanted. Knowsley Road had seen some great sides down the years and this one was certainly up there. 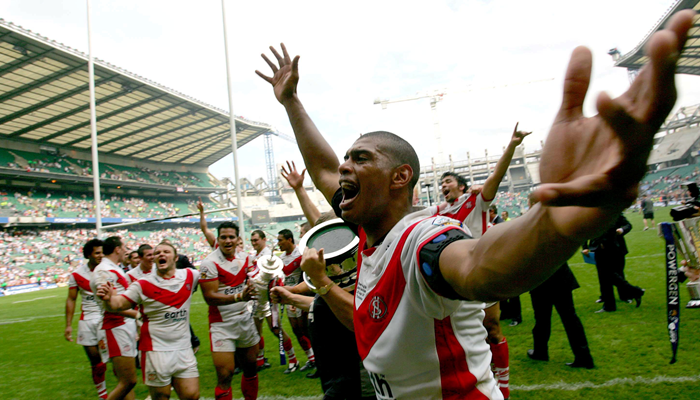 Led from the back by Man of Steel Paul Wellens, there was international class right the way through with Jamie Lyon the stand-out name of a star-studded squad. Great Britain half-back partners Sean Long and Leon Pryce were in the form of their careers, not to mention Keiron Cunningham at hooker and Lee Gilmour in the second-row. There was also two of the countries brightest young talents in James Roby and James Graham providing squad depth.

After hammering Huddersfield in the Challenge Cup Final, Saints topped the Super League table by some eight points and conceded only 439 points in 28 regular-season rounds. Their closest challengers, Hull FC, were no match for them in the Grand Final as Anderson’s men sealed a well-deserved treble and like Bradford, they went onto win the World Club Challenge the following season to hold all four honours at once.

The reason I mention two different seasons for the Rhinos is because this marked the start and the end of the club’s golden generation of success. Both the campaigns mentioned are also the most successful in the club’s history with 2004 the year it all began. 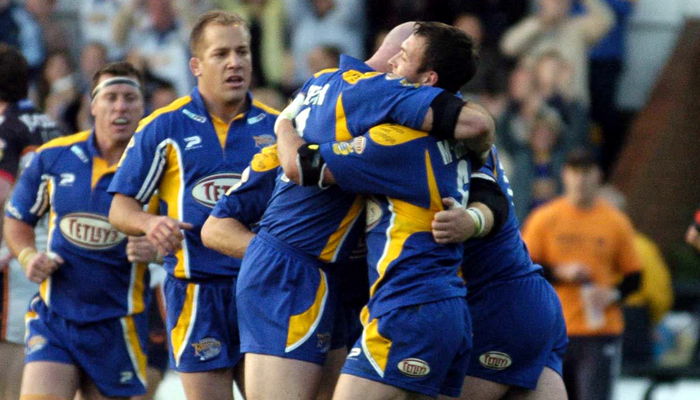 Tony Smith came in to replace Daryl Powell after the team had fallen agonisingly short of winning silverware in 2003, and he walked into a side with incredible potential. Kevin Sinfield, Danny McGuire, Rob Burrow and co were all predicted big futures, and so it proved, with the young Rhinos losing only two Super League games on the way to a record-breaking 50-point season total. It was a team based on pace and they proved they could handle the big stage, beating Bradford 16-8 in the Grand Final to win the club’s first league championship for 32 years.

Fast forward more than a decade and having gone onto win a further five Super League titles, Kevin Sinfield led out the Rhinos one final time at the 2015 Grand Final, chasing the club’s first ever treble. Having beaten Hull KR 50-0 in the Challenge Cup Final and won the League Leaders Shield in the most incredible fashion, Wigan stood in their way. But nothing was going to stop this formidable team as the departing Sinfield, Peacock and Leuluai led them to the historic victory. Despite an aging side, the Rhinos played a fast-paced, attractive brand all season as they once again proved the doubters wrong.

This Wigan team showed they were made for the big occasion, claiming a league and cup double masterminded by Shaun Wane. Despite finishing fourth in the league, the Warriors had the best defence in Super League and timed their run in both competitions to perfection. 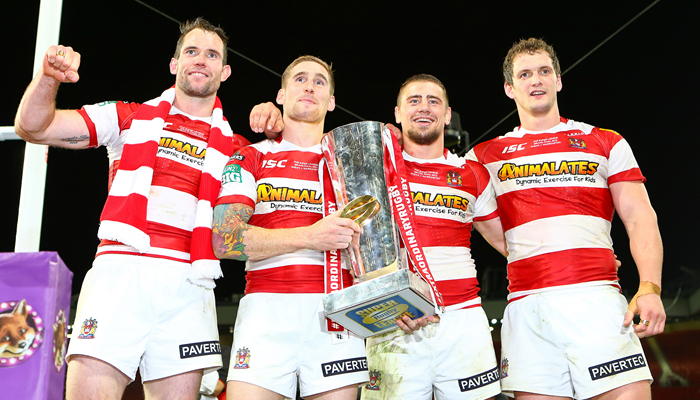 Based on well-structured defence but still with an expansive attacking style, the likes of Sam Tomkins, Josh Charnley and Pat Richards showed their class throughout the campaign. Led by Sean O’Loughlin, the Warriors always looked hard to beat when they were at full strength, with Michael McIlorum using his craft from hooker to create numerous tries.

Having nilled Hull FC in the Challenge Cup Final at Wembley, Wigan’s double hopes were slipping away when they trailed 16-2 in the first half of the Grand Final against Warrington. However, this was a team with great character and they produced a sensational comeback, scoring 28 unanswered points to win the double. Their never say die attitude was epitomised by stand-off Blake Green who picked himself up after been knocked out to claim Man of the Match.