Wakefield Trinity’s Belle Vue is set to be sent into the 21st century following a month of work – and it’s fair to say it has been an impressive month.

The club has been trying to build a stadium for a number of decades, but decided against that move and have now been clamouring for the redevelopment of their old girl instead.

Well, it’s certainly been quick moving after the stand began to be demolished back in early July and this is how the Wakefield East Stand looked against the Wigan Warriors yesterday: 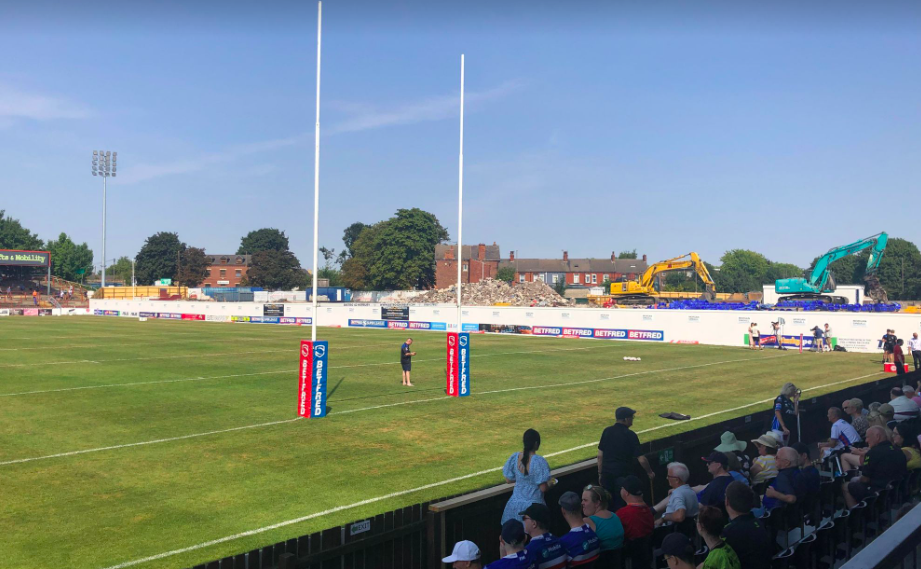 Chairman John Minards previously said live on Sky Sports back in July before the stand was brought down:

“It’s been a long time coming – this club is 150 years old next year and the last 50 years – which I can speak of – it has needed it since then.

“We’ve been on this plan for about three years, but it’s a £12 million project.

“We have the wonderful floodlights which we put in last year, but the big flagship is the East Stand which we will replace with a big new, 2,500 seater stand with all the facilities we need.

“It will have everything you need for match day hospitality – a big restaurant for 250 people and on non-match days it will be a facility on the other 350 days of the year.”

It’s fair to say that the atmosphere wasn’t hindered in any way either with the attendance being just under 4,000 with Wigan bringing a healthy away support yesterday.

But, the stadium was as loud as ever as Trinity subjected Wigan to a surprising 30-12 defeat – and they were full value for those two points that sent Wakefield four points above Toulouse Olympique who now stay bottom of the Super League table after their own defeat to the Warrington Wolves on Thursday night.