Australian TV presenter and life-long rugby league fan Adam Hills will be part of the presentation party for the 2018 Chellenge Cup final between Warrington Wolves and Catalan Dragons.

Alongside his work presenting the BAFTA award-winning TV show ‘The Last Leg’, Hills has been instrumental in the founding of Physical Disability Rugby League in the UK and is part of the Warrington PDRL side, who will play in the inaugural PDRL World Club Challenge against South Sydney later this year. He will also be taking to the hallowed Wembley turf at halftime of the Challenge Cup Final to take part in the charity challenge to raise money for the Warrington Wolves Foundation. 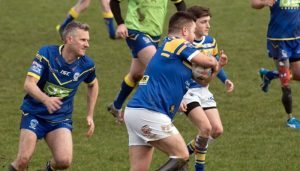 Burnham was elected as Mayor of Greater Manchester in May 2017.

Prior to this Andy was MP for Leigh from 2001. In Government, Andy has held Ministerial positions at the Home Office, Department of Health and the Treasury. In 2008 he became Secretary of State for Culture, Media and Sport, before returning to Health as Secretary of State in 2009.

In opposition, Andy has served as Shadow Education Secretary, Shadow Health Secretary and Shadow Home Secretary. Andy is a thought leader and champion on the Northern Powerhouse agenda, and committed to ensuring bold, radical and ambitious plans for Greater Manchester as a major economic and political power.

The Presentation Party will be introduced to the competing teams and match officials prior to kick-off. They will then be responsible for presenting the commemorative medals and famous trophy to the winning captain.