England managed to draw first blood in the Autumn test series with New Zealand, and there were plenty of positives to take from the performance. One of England’s standouts was without doubt Oliver Gildart. It was a big call from Wayne Bennett to include him over Mark Percival but that risk paid dividends. He held his own against powerful opposite number Esan Marsters, while his superb solo try oozed individual quality.

Could watch this try on loop for ever ???

In that situation plenty of players, especially younger inexperienced ones, would have accepted the tackle after making the break and taken the plaudits for a good run. But Gildart’s confidence to back himself on the outside with no support and three defenders around him speaks volumes of a players with maturity ahead of his years. Centre has been a problem position for England for a long time, but it finally seems as if we’re producing some quality in that area.

Neutral referees are needed for internationals

As much as England were the better team on Saturday, you can’t ignore a couple of controversial calls that went in our favour. The big one was Jake Connor’s penalty try. It was a blatant foul by Dallin Watene-Zelezniak, but the grounds on which Ben Thaler gave the decision were questionable. Would Connor really have grounded the ball if the Kiwi fullback didn’t lead with his knees? I’m not so sure.

Another thing that struck me was how unwilling Robert Hicks was to let Watene-Zelezniak talk to him. As New Zealand captain, it’s his right to speak with the referee but Hicks was having none of it, often rudely dismissing him mid-sentence which made the 23-year-old even more frustrated. It’s time we introduced neutral referees for all internationals, no matter where games are played. If that were the case, then situations like these wouldn’t happen. 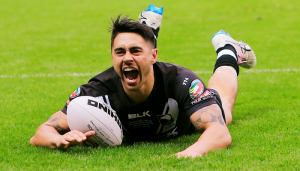 If one man can overturn this test series in New Zealand’s favour, it’s Shaun Johnson. The maverick halfback barely put a foot wrong on Saturday but was just unable to inspire his team enough to grasp a victory. The result, however, shouldn’t take away from his performance.

He was at the heart of everything the Kiwis did in attack, including a superb deft pass for Esan Marsters’ try. He was also unlucky not to provide a match-winning assist, with his ball to Jesse Bromwich in the second half just going marginally forward. His halves partner Kodi Nikorima also ran England ragged, typified by his offload for Watene-Zelezniak’s try. It’s an electric partnership that will cause Bennett’s side plenty of problems in the next two tests, so focus needs to be on closing them both down.

Attendance a let down

The game was full of excitement but the stands certainly weren’t. The first test was able to draw in a measly 17,649 people – just over half of the KCOM Stadium’s maximum capacity of 25,400. For an international game between two of the world’s best nations, both of whom have featured in World Cup finals in recent years, that’s a poor figure.

The problem for me lies in the marketing. Okay, so the games have been advertised for a while but it’s the same old strategies that have been used for years and continue to bring in the same low attendances. Some fresh, creative ideas to push the game out there would improve things instantly and this is where someone like Eddie Hearn would fit in perfectly. It’s a real shame how underwhelming our England’s international scene is, especially when you see how much it’s progressing in the Pacific Islands.

As well as England’s first team grabbing victory over the weekend, there were also wins for the other two English teams in action. England Ladies thrashed France Ladies 54-4 with a dominant performance, while the England Knights just edged Papua New Guinea 16-12.

Been a brilliant week for the Knights – now it’s onto Port Moresby! ?? pic.twitter.com/817McIOZv4

From what I’ve seen on social media, the Knights players look to be really enjoying their experience. As well as testing themselves against a dynamic PNG side, they’ve had the chance to take in the culture and integrate with the locals. They’ve visited schools and communities and seem to have received a warm reception. They’re certainly doing a great job in creating a good relationship between the two countries.