Since returning from a loan stint at Penrith Panthers at the back end of last year, Hardaker has gone from strength to strength. The full-back won the coveted Steve Prescott Man of Steel trophy back in 2015 while at Leeds Rhinos, but he has arguably been in better form this season and moving to the Tigers in an attempt to revive his career has certainly paid off. On so many occasions this year he has torn up the opposition defence, and although there have been some great performances at full-back – including Jamie Shaul at Hull – nobody has come close to Zak this season.

Who else? I thought nobody would come close to Denny Solomona’s record of last year but I am willing the former Huddersfield Giants player to beat it. Before injuring his shoulder in Castleford’s victory over Salford back in July, he had played in every game and failed to score in just four. His performances speak for themselves and you could not have a dream team without him in it.

Saints have undergone an incredible revival under Justin Holbrook, and I think Percival has been one of the stand-out centres in the competition. He has it all – he’s strong in both defence and attack, as well as having a mean kicking game. The one performance that really caught my eye was his side’s 19-12 victory over Hull at the beginning of July. He scored twice – one stunning try that proved to be the winning score – and kicked impeccably to steer Saints to two points. It was around this point that the Merseyside club turned their season around, and I think Percival played a huge part in that.

This was a tough choice. There have been some solid performances at centre this year – including Kallum Watkins who has impressed with his boot – but I’ve gone for Castleford’s captain fantastic. Shenton has been instrumental in the Tigers’ rise to the summit of Super League, setting up some phenomenal tries for his partner Greg Eden, as well as scoring a few himself and being solid in defence.

This season has been one for the wingers, making this decision even harder. Eventually, I’ve opted for Saints’ star Makinson. Potentially a rogue decision, but I think he’s got pace to burn and always puts 110% in. Having been at the club since a youngster, Makinson’s developed a leadership on the field that is evident when he often controls the game and is influential in so many areas. He’s also not half bad at kicking and can defend well too.

In an otherwise lackluster season for the Warriors, Williams has been a constant performer. I could’ve gone with Albert Kelly of Hull, who even notched himself a Steve Prescott Man of Steel nomination, but Williams snatches it for me. He’s still young, he’s adventurous and always looks dangerous on the ball. He’s scored 11 tries and has the most try assists in the Wigan side. 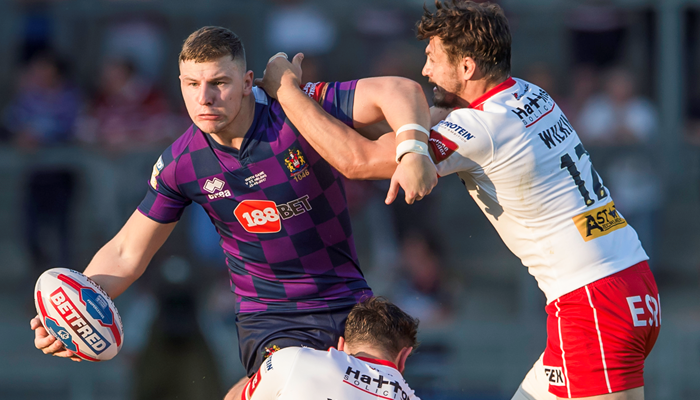 There really was no competition for this spot. From the word go, Gale has been magnificent. He is the glue that holds the Castleford team together and without him, I don’t think they would be where they are now. He completely controls the game and his teammates play well around him. In my opinion, he has to win Man of Steel.

The Saints man has to be on the plane for the World Cup. He has been significant in his side’s recent resurgence, and even when they were struggling at the start of the season he was always one of their most consistent performers. The perfect prop.

Again, this could be a rogue decision but I think he has almost carried his St Helens side through the competition. Although Paul McShane has had an outstanding season, and so has Matt Parcell at the Rhinos, I’m a huge Roby fan. He has been around for a while, but he’s still so fast from the play-the-ball and has the same creativity and flare he did when he first started out. It’ll be a tough decision when Wayne Bennett decides his England team – will he go for McShane or Roby to partner Josh Hodgson? I can’t wait to find out.

A prop who should also be in the England squad this October. Watts and Walmsley would be a force to be reckoned with on that field. He has arguably had his best season in a Hull shirt, and is forever causing the opposition problems. Solid in defence and attack, he’s involved all over the pitch and has to be on the plane next month.

One of the most under-rated players in the league. As a Wakefield fan, I’ve had nothing but a grin on my face all season, and I couldn’t do a Dream Team without sneaking a Trinity player in. Having said that, Ashurst fully deserves his place. He goes about his business, week in week out, and I don’t think I’ve seen him have a bad game all season. He could be an outside choice for an England spot this year.

A beast. Despite Salford falling apart in the Super 8s, after finishing the regular season in fourth, Masila has had a storming season. He’s scored 14 tries and had a hand in a few others as well. He’s a handful for any team to deal with and is a linchpin in the Salford side.

In his last season at Hull, Ellis has been key in their Challenge Cup success and third-placed finish. Ellis is the perfect captain – controlled on the field, as well as having the right amount of fight and tenacity. He has played the game for so many years now, his rugby brain is fantastic and I really hope he can cap an illustrious career with a Grand Final victory.